Posted May 10, 2015 by Melanie in Melanie, Paranormal Romance, Reviews / 20 Comments 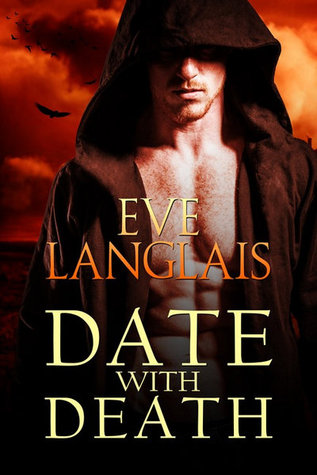 Note: Date With Death was originally published in 2010 by Liquid Silver Books. This July 2013 re-release (with new cover) is a slightly expanded version, with new scenes featuring Hell's favorite matchmaker, Lucifer, so to incorporate this novella into the Welcome to Hell series.

His mission was to harvest her soul, but he captured her heart instead.

Marigold has a date with Death, but when she foils his plan to take her soul back to Hell, she invites him to dinner instead.

Mictain, an Aztec god who now collects the dead for Satan, is baffled at his interest in the plump human who can see him. Intrigued--and in lust--he can’t help pursuing her. But things are never simple when gods are involved.

Lucifer, Lord of Hell tries to warn him away and even Marigold’s long lost father decides to butt in. But, despite the opposition, things heat up between them, and Marigold learns, when Death comes calling, it’s best to get naked and invite him into bed—and her heart.

Once again, we visit Lucifer’s Hell and he is back to matchmaking again. In this one, we have Mictain, who is an Aztec god of death and a grim reaper. He has come to collect Marigold’s soul. However, there is a problem. She sees him, figures out who and what he is. So, she stops what she is doing, so she doesn’t die. Lucifer wants Mick to figure out why she can see him, because if people see the grim reaper, the number of deaths is going to plummet.

As we go through the story, we learn that Mari has a very special father. She is not aware of her paternal parentage. She thinks that she is just a normal witch. She is very ballsy as she asks the reaper out for a date. Who does that? “I know you came to collect my sole, but since I’m not going to die, you wanna go out for a bite to eat?”

This was a cute and quick read. When I grabbed this, I didn’t realize I was getting a novella. I thought I was picking up book three in the series. I guess that’s what I get for not paying attention and just one-clicking. LOL. I enjoyed the story. I loved the banter between Mick and Mari.

This story was originally part of an anthology, which means it works great as a stand alone story. It is a great way to get started on this series if you are just wanting to give it a try without the commitment of reading a full book. I can’t wait to get back to the last two books in this series and see who Lucifer will put together next.

20 responses to “Review: Date with Death by Eve Langlais”