Posted May 31, 2015 by Melanie in Melanie, Paranormal Romance, Reviews / 26 Comments 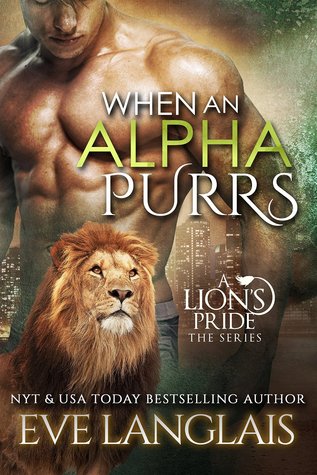 A lion’s pride isn’t defined only by those he commands but also resides with his hair, so when a human dares to butcher Arik’s mane, he gets his revenge—and claims her as his mate.


A billionaire CEO and leader of the largest East Coast pride, Arik is a ladies man and a lion. Used to commanding others, and obedience, he can’t believe it when a hairdresser with tempting curves chops off a hunk of his precious mane.

But her biggest mistake is in running from him.

Run as fast as you can, little mouse, because this cat loves to chase—and pounce.

Oh, and he also likes to nibble on tender bits. What he doesn’t expect is to fall for a human woman, a woman who can make the impossible happen because everyone knows lions can’t purr…until now.

When an Alpha Purrs is another light-hearted, fun read from Eve Langlais. This one features a billionaire king of the concrete jungle who is very much used to getting his own way. That is until he goes to get his hair cut and his normal barber isn’t available. He is forced to use his barber’s granddaughter. He starts by insulting her by not wanting a woman to cut his glorious mane. Then he continues to push until she takes retribution by cutting a huge hunk out of his perfect locks.

The story starts off with a lot of banter between our hero and heroine. Arik finally decides that he likes Kira and works really hard to get her out on a date with him. They banter more and add lots of flirting. I did get a little worried that this was going to be a contemporary story just with a shifter, as there was no suspense at this point in the story. I shouldn’t have been. Eve came through as always.

Kira ran from a past. An ex-boyfriend to be exact. He has quite the stalker issues. He follows her to her new location. Arik immediately catches on and takes things into his own hands. The fun really starts when he takes Kira to his condo for her protection and she has to meet the Pride.

When an Alpha Purrs is an quick read. I read it in one sitting. It was just what I needed after a tough week at work. Something that was uncomplicated and to make me laugh. There was just the right amount of sexiness to keep things interesting. While I can’t wait to read book two in the series, where the hero is the Pride’s beta, Hayder, it is book three about the Pride’s omega, Leo, that has me chomping at the bit.

26 responses to “Review: When an Alpha Purrs by Eve Langlais”