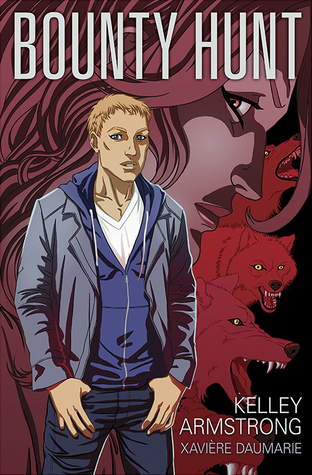 Note: This is a full-color graphic novel!

After the Australian Pack murdered Reese William’s parents, the young werewolf fled and took refuge with the American Pack. Three years later, the Australians have tracked him down and dispatched a bounty hunter to bring him back. That bounty hunter, though, isn’t the lone wolf who owes them a debt, but his twenty-one-year-old daughter, Madison. Maddie is determined to bring in the rogue Reese for her ailing father. Now Reese has to show her the truth behind her client's lies…and avoid being the cause of an all-out war for Elena and the rest of the American Pack.

This is a graphic novel set in the Women of the Otherworld world. This story follows Reese, the young Australian werewolf who joined the pack in the book Frostbitten. If you read Chivalrous, then you know Reese’s back story about why he left Australia. The backstory of Chilvalrous is pretty critical to the story in Bounty Hunt.

Maddie is the human daughter of a werewolf. She came to live with her father after her mother was murdered. Her mother taught her at a young age to call a certain number if she were ever in trouble. She went to live with her father after her mother’s death. Her father owes a debt to the local Australian werewolves. He is asked to find Reese and bring him back to the pack. Maddie decides that she is better equipped to bring Reese in than her father, so she leaves for America.

Maddie thought it would be pretty easy to seduce and bring in a young college boy. However, she was not aware of the past that Reese has had with young college girls. He has no trust in them. It is harder to flirt and seduce him than she expects. The Australians come to America to speed things up. They have to deal with Elena and Clay

Bounty Hunt is a nice addition to the Otherworld series. We get to spend more time with Reese. Elena and Clay make an appearance. Plus the new additions of Maddie and her father as characters were done well. There are pages at the end that come from the Legacy. Keep reading all the way to the end, even past the Legacy. The very last page is a nice treat. Showing us what Jeremy and Jamie had to deal with while Clay and Elena are gone.

While I think you could read this book without knowing the Otherworld stories, I do think you will miss out on a lot of the backstory. This was a limited edition print. I believe that this is something Kelley Armstrong printed knowing that it would only be picked up for the diehard fans. I don’t read a lot of graphic novels, but I’ve read some. This one is well done with great artistry. I will continue to get my hands on anything that Kelley Armstrong publishes, if I can manage it.