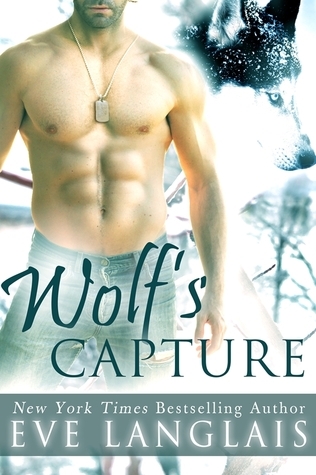 She might think she’s captured the wolf, but in the end, he’ll take her heart.

Brody is a soldier who misses the excitement of the military and its missions. He retired to work as clan beta in Kodiak Point. Talk about boring, until he’s captured by a foreign enemy.

Not for long. This wolf will do anything in order to get away–even if it involves seduction.

First step in plotting his escape: pretend interest in a woman. But Layla isn’t just any woman. She’s special.

Not human. Not shifter. He doesn’t know what this exotic lady is other than his.

A prisoner for years, Layla isn’t sure what to make of the enemy who shares a cell with her. He promises her hope, but that would involve trust. Despite her doubts, she can’t help but be drawn to him. Unacceptable which means she does her best to drive him nuts.

Working together, can they escape the clutches of the enemy?

And do they dare fall in love?

In Wolf’s Capture, we have Brody, the second-in-command in Kodiak Point. He’s a wolf shifter and he is extremely bored with life outside of the military. He has been secretly happy with all the issues going on in Kodiak Point, because it has livened things up. When he is patrolling the border, he senses something and goes to check it out and is completely surprised with what he finds.

Layla is our heroine. She is an extremely unique individual who has quite a way with animals. She has been a prisoner for most of her life. Her master uses her unique abilities with animals to his advantage. She is constantly trying to escape and she learns something new with each escape attempt, but The Master also plugs the error that she used to escape.

This is another great additional to the Kodial Point series. This book has everything I’ve come to expect in the series. There is suspense and action. The characters are very well developed and extremely funny. There is quite a large twist at the end, which made things interesting. My only criticism of this book, our couple goes from zero trust in each other to sex in no time flat. I would’ve liked to have seen their relationship develop at a more realistic pace.

While most of Wolf’s Capture takes place outside of Kodiak Point, but we still get some time with Boris (he’s the moose shifter that is the hero of Outfoxed by Love, book two) and Travis (he’s the grizzly that will star in the next book, Grizzly Love). It was great to see these two, because they are two of my favorite in the series. I’m really excited to read Travis’ story which comes out soon.