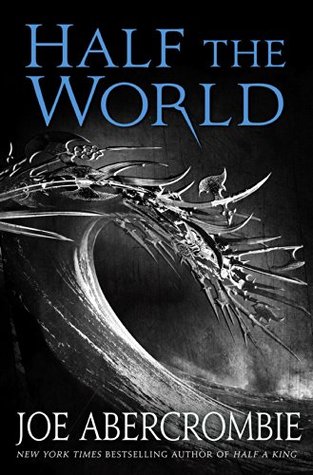 New York Times bestselling author Joe Abercrombie’s thrilling new series continues in the follow-up to Half a King, which George R. R. Martin hailed as “a fast-paced tale of betrayal and revenge that grabbed me from page 1 and refused to let go.”

Sometimes a girl is touched by Mother War.

Thorn is such a girl. Desperate to avenge her dead father, she lives to fight. But she has been named a murderer by the very man who trained her to kill.

Sometimes a woman becomes a warrior.

She finds herself caught up in the schemes of Father Yarvi, Gettland’s deeply cunning minister. Crossing half the world to find allies against the ruthless High King, she learns harsh lessons of blood and deceit.

Sometimes a warrior becomes a weapon.

Beside her on the journey is Brand, a young warrior who hates to kill, a failure in his eyes and hers, but with one chance at redemption.

And weapons are made for one purpose.

Will Thorn forever be a pawn in the hands of the powerful, or can she carve her own path?

Last year I had a bad run of YA fantasy. A really bad run. So bad that I was seriously considering giving up YA altogether, b/c I had clearly matured past the point to being able to enjoy it.

And it was Half the World’s predecessor Half a King that kept me from making a brash decision I would inevitably come to regret.

I am pleased to tell you that Half the World (IM humble O) has surpassed it.

Thorn is a girl who lives in a world where women are resolutely confined to more delicate pursuits than say . . . WAR.

As children, they may be temporarily indulged in their desire to train with the boys and their wooden practice swords, but the older they get, the more discouragement they encounter, and if they persist in the stubborn hope of being the first girl in memory to take the Warrior’s Oath and fight for their King, then more extreme tactics are employed to set the wayward female on a more acceptable path.

For Thorn that means facing impossible odds in her final test as a student.

But it is made clear that even should she win, there will be no place for her among the men.

And the situation isn’t improved by Thorn’s own surliness and sense of entitlement.

Abercrombie does an excellent job of showcasing how obstinately difficult a 16 year old girl can be, without making you hate her. Instead . . . you remember. You remember how convinced you were of your own infallibility, of how much more deserving you were of the thing that you wanted than that person over there. And then you remember how hard those lessons proved to be when you finally realized you were wrong.

B/c Thorn does learn. And it is hard.

I loved her, prickliness and recalcitrance included.

She winds up in disgrace that leads to swearing an oath to Father, yes, Father Yarvi, and Father Yarvi sees fit to have her trained by Skifr, a bizzare old woman from the far south.

And believe me when I say that “bizarre” does not even begin to cover it.

But I loved her too.

Know who else I loved?

The hodgepodge of villainous-looking crew members that Rulf assembles for the voyage Father Yarvi is leading to seek allies for Thorlby against the High King and his oppressive dictates.

Thorn wondered what mountain of corpses this lot might have heaped up between them, but she wasn’t one to be easily intimidated. Especially when she had no choice.

Despite this initial impression, the men become family to both Thorn and Brand (don’t worry, I’ll get to him in a minute), and more and more my distinctly different first impression was reinforced:

She put on her bravest face, stepped up to the biggest man she could see and tapped him on the arm.
“I’m Thorn Bathu.”
“I am Dosduvoi.” She found herself staring sharply up at one of the biggest heads she ever saw, tiny features squeezed into the center of its doughy expanse, looming so high above her that at first she thought its owner must be standing on a box. “What bad luck brings you here, girl?” he asked, with a faintly tragic quiver to his voice.
She wished she had a different answer, but snapped out, “I’m sailing with you.”
His face retreated into an even tinier portion of his head as he frowned. I’m sure there are people out there that are absolutely horrified by the comparison, and make no mistake, this is a book written by Lord Grimdark himself, so there is nothing Disney about it, but . . . I can’t help it, that’s what I saw in my head. *shrugs awkwardly*

And I haven’t even gotten to Brand yet. *sighs* Suffice it to say that Brand is . . . experiencing the exact same types of things that Thorn is experiencing, but he is a softer, gentler example of adolescence, and he serves as both a wonderful foil for Thorn, and a secondary illustration of why it’s idiotic to try to shove people into gender-specific boxes.

Bottomline: It’s just really, really good. Half the World is a stellar followup to Half a King, making this is a series that should be on the bookshelves of anyone who loves fantasy. And with the next installment Half a War just a few short months from release . . . blah, blah, just read it. You’ll love it. *winks*

27 responses to “Review: Half the World by Joe Abercrombie (@jessicadhaluska, @LordGrimdark)”