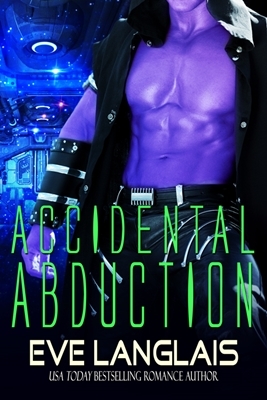 He didn't mean to abduct the human female, but now that he has her, should he kill her or take her as his mate?

A boyfriend's attempted murder leaves Megan floundering in the ocean. Sinking without hope, the bright light she sees in the night sky isn't her doorway to heaven, but rather the beginning of her accidental abduction by a space pirate. While thankful of his rescue, Megan stays true to form and just can't keep her mouth shut, even when he keeps threatening to kill her--or auction her off to the highest bidder.

Tren retired from his job as a mercenary so he could enjoy life, but he never counted on the boredom of normalcy. The acquisition of rare items has somewhat filled the void, but his accidental abduction of an outspoken earthling, turns his life upside down. Her fiery spirit draws him while at the same time drives him insane. Struggling with his urges, he must decide-- throttle her barbarian neck or ravish her?

I had no idea what to expect when I started this book. It’s my first read by this author and I have to say, it certainly was different.

“Maybe drowning won’t be so bad” When a book starts out like that, it did peak my interest right away. Megan is treading water in the middle of the Pacific Ocean where her con man boyfriend has left her to die. Out of the blue(literally), a spaceship starts lifting her, along with a lot of ocean life, up into the opening of the ship. The ship belongs to Tren, a large purple creature that looks a lot like a human, but isn’t. He’s a former mercenary, and is now engaged in obtaining rare finds for collectors in other universes. And Megan just might be the rarest he has ever procured, especially when he decides to keep her to sell in the sex slave trade-and not one on earth.

Megan is one of the spunkiest heroines I have come across lately. She’s got a potty mouth, she doesn’t take anything off of anyone, and proceeds to drive Tren crazy with her non-stop talking, and her lustful personality. Lusty, sexy, any other name to do with sex- that describes Megan. Tren is considered one of the biggest bad asses of the galaxy, due to his mercenary jobs. Most people are scared to death of him, but not so Megan. She fights Tren every step of the way, and of course they spend a lot of smexy times together on their way, to take her to be traded.

This story isn’t meant to be serious. It’s very lighthearted, and when there are dangerous situations, it just gets all cleared up way too fast. For some reason, it almost reminded me of a sexy cartoon-it was so hard to picture a purple hero without my mind going there. The other thing it really reminded me of, was the Star Wars bar scene, with all the different types of alien creatures. That part was very imaginative, I thought.

It was kind of a fun read, I will give it that. But it wasn’t exactly my favorite read, and as I said before, it wasn’t what I expected. I think I thought it would be more serious, and I did miss that a lot. I did like Tren, but Megan, while I liked her in the beginning, wasn’t a favorite by the end. Just irritating. I guess I am just used to there being more. More adventure, more story, and even more violence, as opposed to sex scenes every few pages. It kept me reading, so it is easily read, and it is a series, one I don’t think I will be continuing. I do, however, still want to try a shifter book by this author. I would recommend this to lighthearted (and very sexy), adult romance fans, and I know there are lots of people that will completely enjoy this read, it just wasn’t a good one for me.