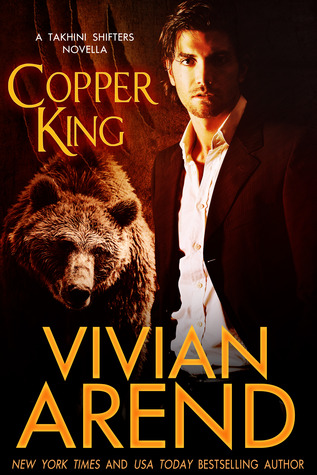 Three things make billionaire Jim Halcyon's to-do list: women, work...and more women. It's a perfect agenda for a rich shifter who has no problem letting his inner grizzly out to play. From the bright lights of Vegas, to the sophisticated action of New York--he's got the money and the power to do anything he wants.

Anything, except resist the lure of Lady Luck, an ancient copper coin he gambles yearly to possess. Jim is determined to regain control of the pretty penny, and damn if he'll let any bit of eye candy distract him from his goal. Not even the mesmerizing woman in the middle of the casino floor with the shimmering hair and enormous green eyes.

With a life-changing move ahead of her, Lillie's finagled a temporary layover en route to her future. She's got five days to soak in new experiences, and while Vegas is too big and shiny and loud for her shy bear self, she's eager to do this up right. It's the last chance she's got to let her hair down.

Until his challenge begins, Jim is more than willing to oblige Lillie's wish for a final fling. Only Lady Luck has some twists of fate planned for them both...

For those that like sexy, shifter romance, with no hint of urban fantasy or other special powers, this novella could be just the thing for a cold winter’s night, or a hot summer’s day, depending on where you are in the world right now.

Jim is a grizzly bear shifter, in Vegas with his best friend Damon, a wolf shifter. They have a few days off for rest and relaxation before they settle a bet that they have been doing yearly for a long time. When they were young, they pooled their money, and bought an ancient copper coin. Every year they do some kind of test, extreme sports etc. The winner gets to keep the supposedly lucky coin for the year. This year Jim is determined to win it back, but lady luck has other plans in store for him in the form of Lillie. Lillie has come to Vegas for a final fling. And the reason is a big secret.

Lillie as a character was pretty great. She is sweet, and petite, all the while being a bear shifter. Shifters in Ms. Arend’s world building don’t think twice about sex with no strings. So Lillie’s more then ready for a fling to happen-her words, not mine. Jim is mega rich, a bear of a man(excuse the pun), and too busy to take time off, so when Damon tricks him into taking more time than is necessary for the bet, he’s not happy-that is until he catches sight of Lillie. I ended up really enjoying Jim’s character as well, even when he’s being Mr. Bossypants!

It’s not necessary to have read any of the other Takhini world books to enjoy this novella. I have read several of the Takhini books, and as with them, I enjoyed this read as well. Most of them take place in the town of Whitehorse, in the Yukon Territory, so the setting of Vegas was different this time around, at least for most of it.

If you don’t mind a short read for one of those times not conductive to diving into a whole novel, then this read is perfect, and I recommend it to adult readers. As in very adult readers!