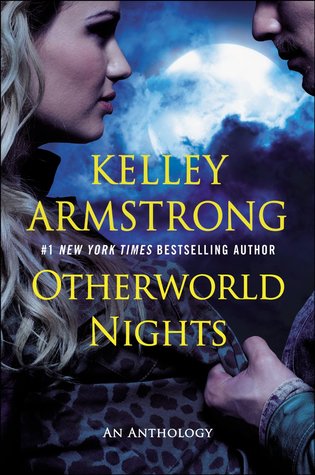 It’s been more than ten years since Kelley Armstrong began the Otherworld series and drew legions of fans to a realm roamed by witches, werewolves, necromancers, vampires, and half-demons. Many of the novels have become bestselling favorites, but not all of the Otherworld adventures have been easy to find. At last, Otherworld Nights shares short stories that have previously been available only online or in obscure collections. Fans have long been clamoring for this anthology and they won’t be disappointed—they’ll find plenty of surprises are in store.

In the WOMEN OF THE OTHERWORLD universe, mothers (witches are the exception) don’t play a large role in their children’s lives once their abilities start developing because in most cases they are human, and as a result can’t be let in on the secret. Robert Vasic has been a part of Adam’s world since he was eight years old, but this short shed some light on his mom who was no pushover. When confronted with a possible pyromaniac kid, instead of resorting to institutionalization or medication, Talia did everything in her power to help her son without labeling him, and eventually found what she was looking for in the most unlikely of places, a demonology professor. My favourite part of this tale was when Vasic insisted on keeping Adam’s mother in the dark, and she flat out refused by stating that her love is in fact unconditional, Exustio half-demon notwithstanding.

After the werewolves, Cassandra is #2 on my top WOTO characters list. I’ve always loved her blasé attitude, and her advanced age makes her one of the most Other of them all. This was a quick read, but I really enjoyed witnessing DuCharme’s struggle to fulfill her annual kill requirement. Out of this series’ entire cast, she’s the one who never seemed to have any qualms about taking a life, however in TWILIGHT we get a glimpse of her inner conflict, and learn why she and Aaron had a falling out so many years ago. Cass does eventually do the deed, but she has to choke down the blood which made me wonder, would she have turned human had she delayed any longer?

I read THE HUNTER AND THE HUNTED pretty recently, and this short appeared in that eSpecial, but I can never resist revisiting Clay & Elena when an opportunity presents itself. After eighteen years, my fav werewolf couple finally gets a honeymoon, no wedding bells for them though, so a trip to St. Louis is as good as it’s ever going to get. They both have their hearts set on making the other happy to the point that neither will admit to being bored out of their skulls, or to the fact that there’s a mutt on their tail. This leads to classic Clay & Elena miscommunication, a hunt, followed by their trademark romp in the woods after a kill. I love these two!

Reese was a latecomer to the WOTO series, and little is known about his past other than that it was traumatic. CHIVALROUS was essentially his back story in a nutshell, and in my opinion, the saddest short in this anthology. His first love was not a pleasant experience, and came at a high price. Readers learn why he fled his original pack in Australia, and the reasons behind his refusal to date no matter how many girls Nick throws at him. Werewolves traditionally don’t have pleasant childhoods, and Williams’ is a prime example of that. This tale also tied in nicely with HIDDEN, and I sincerely hope that one day Armstrong will grant Reese his revenge.

This was a fun novella about Karl being Karl, and Hope trying to rein him in. Adams’ family has no clue of her true nature which made her gran’s museum exhibit dedication rather ironic. And, of course you can’t bring Marsten into a place with priceless jewels on display without expecting him to try to steal ’em. LUCIFER’S DAUGHTER did a great job of showcasing Hope’s chaotic nature, and her werewolf mate’s sticky fingers while also managing to add a romantic spin to the ordeal. These two are seriously perfect for each other, and I loved that the author gave them their own slice of HEA in this compilation because it’s been a long time coming.

The best and longest story out of the bunch! Armstrong is a Canadian author, but her werewolves’ home base is in New York, so I was pleased that the crew made a trip up North to Algonquin Park for Christmas. The twins played only minor roles in the later installments, and it was nice to see the whole family together for a change. I enjoyed witnessing the challenges of furry parenthood, and I liked how Elena started bringing Noah into the fold by introducing him to the ways of mutt hunting. The Big Bad in this tale not only made Michaels question her decision to keep Kate & Logan in the dark about their heritage, but also caused her unfortunate past to rear its ugly head. The author managed to throw a decent number of twists at readers while delivering a satisfying ending as well. I’ll probably re-read this one again in the near future because it was just so well-written.

I bought a print copy of THIRTEEN, so this novella was a repeat, but it’s the story of how Elena challenged Jeremy for alpha which means that it was definitely worth a second read. Fans of this series know that there’s nothing traditional about Danvers’ Pack leadership methods, thus why would the passing of the torch be any different, right? I can’t really say more than that without giving anything away, however it was a cute spin on the classic fight to the death. Xavier also makes a brief appearance which was a fun bonus because we haven’t seen him since book 6, and he’s been known to pull one over on Elena in the past, so I got a kick out of watching her return the favour.

Savannah & Adam finally get their HEA! I’ve been waiting for this ever since I finished the final installment two years ago. Levine’s immaturity gets her into trouble AGAIN, but she actually learns from it this time, and undergoes a surprising amount of character growth for a short in both her personal and professional life. The young witch has been keeping secrets from Vasic, the Cabals are up to no good, and a young supe is in need of the kind of help only Cortez and Winterbourne Investigations can provide. VANISHING ACT was a great way to wrap-up this anthology because it introduced some new mythology to the WOTO universe, and ended on a high note with the conclusion to Savannah & Adam’s love story.