Stompin’ To The Beat

Writing a good Stomp is one of my favorite parts of creating urban fantasy goodness. And music most definitely feeds my Muse.

When working on my Tranquilli Bloodline series, a lot of thumping tunes rock my writer’s cave. For action scenes, I usually crank up some industrial rock, techno (big beat and minimal), electro, breakbeat, and house. Sounds loud, right? Well, my kickass heroine Carina IS a dance club owner. And she shakes things up both on and off the dance floor. 🙂

Here’s a taste of Carina in action. Some pesky vampires from Team Evil interrupt her first date with Alexander…


HAVEN Excerpt
(For this excerpt, I was listening to The Prodigy, Live World’s On Fire)
Alexander stiffened and his head snapped up. His eyes glinted black as night, wild with lust and…aggression? He bared his teeth in a snarl, canines morphing into fangs. Long, sharp, lethal.
On instinct, I pushed against his chest to get some distance between those teeth and my neck. He ignored me, head whipping around to survey the room. A feral growl erupted from his throat and he shoved me under the table.
My cries of protest were drowned out by animalistic roars and breaking furniture. From my spot under the table, I felt around on the bench for my coat, all the while keeping an eye on the room. Dark blurs flitted back and forth, pieces of table and chair flew by…Bingo. My coat. I searched the pocket for my phone. Once in hand, I hit the button for my boys.
The fighting around me stopped. The familiar techno ring tone of Mark’s phone broke the sudden silence. He’s here?
The table above me was tossed away. Steel hands grabbed my legs and dragged me, face down. I dropped the phone and flattened my palms on the floor, trying to resist. One hand bumped into a steak knife and I grabbed it. My assailant flipped me over and lunged. I aimed for his heart but the knife plunged into his throat.

My vampires on Team Good are passionate, fiercely protective, possessive and loyal. Here’s a look at Jonas, aka The Executioner, in action. He gets a tad upset when someone hurts Carina…

VAMPIRE CODE Excerpt
(For this excerpt, I was listening to Front Line Assembly, Echogenetic)
“You touched her.”
Jonas’s sword whistled through the air and sliced off the cowering vampire’s hand in one clean blow. It plopped into the mud. The hatchling howled in agony. Clutching his bleeding arm to his chest, he trembled at Jonas’s feet.
“You kicked her.”
The sword sang down again, lopping off one leg just below the knee. The lifeless limb joined the other in the mud.
The vampire peon passed out.
Jonas shoved his sword into the ground and grabbed the vampire by the hair, holding him aloft with ease. He summoned his power and pushed it into the wounded man, forcing him back to consciousness.
Awakened once again, the vampire screamed, eyes wide with horror.
Jonas bared his fangs. “You bit her.”
He plunged them into the weakling’s neck. He tore a flap of flesh from the front then spat it onto the growing pile of body parts at his feet.
“No more.” With one practiced twist, he wrenched the vampire’s head from his body.
The headless corpse crumpled to the ground. Jonas tossed the head onto the bloody heap, collected his sword and stalked into the night.

Celia lives in California with her husband, daughter, and two feisty cats. She writes urban fantasy and paranormal romance, and has a particular fondness for vampires and the Fae. When not writing, you’ll find her exercising, reading a good book or indulging her addiction to Joss Whedon’s TV shows and movies. 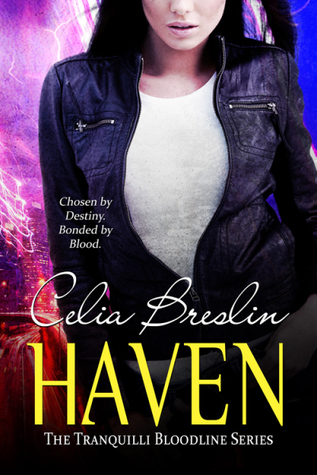 With evil’s minions hounding her every move, and everything she thought she knew turned on its axis, Carina must harness her burgeoning power, unravel her vampire family’s web of deceit, and fight to have a love life… without getting killed in the process.

Thanks for visiting Team Stomp today! Before you go, please vote for Action, Action, and more Action! And enter my giveaway, too. In keeping with our Stomp theme, I’m giving away three e-book copies of my urban fantasy short story, Vampire Code (a Haven prequel). See the Rafflecopter to enter! (p.s. there’s an e-gift card up for grabs, too!).


Visit The Book Nympho to read today’s ROMP post by Jenn Bennett, then VOTE for your fav!