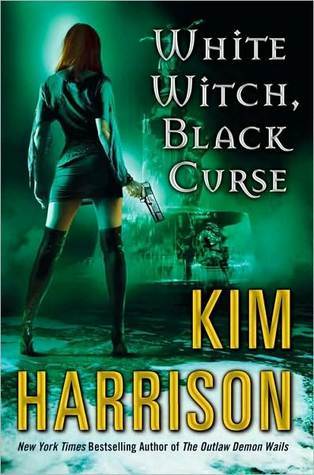 New York Times bestselling author Kim Harrison returns to the sinister and seductive Hollows for the newest blockcuster adventure featuring Rachel Morgan, witch and bounty hunter.White Witch, Black CurseSome wounds take time to heal...and some scars never fade.Rachel Morgand, kick-ass witch and bounty hunter, has taken her fair share of hits, and has broken lines she swore she would never cross. But when her lover was murdered, it left a deeper wound than Rachel ever imagined, and now she won't rest until his death is solved...and avenged. Whatever the cost.Yet the road to hell is paved with good intentions, and when a new predator moves to the apex of the Inderland food chain, Rachel's past comes back to haunt her.Literally.

White Witch, Black Curse introduces us to a new type of Inderlander—the banshee. Well, introduces us directly. Mia (the banshee) shows up in a couple of the novellas, but in the seventh installment of The Hollows, she is front and center. And not in a good way.

Harrison’s version of a banshee is more like a succubus or a psychic vampire. They’re seen before a person dies, not b/c they’re a herald of death, but b/c they’re doing the killing. By sucking the life force, or aura, from a person, and after that’s gone, the soul. They’re dangerous, apex predators, and their ability to feed is strictly monitored by the Inderlander community and strictly policed by other banshees.

Or at least that’s the claim. Personally, I don’t think the book backed up that idea. I.S. (Inderlander Security) didn’t do a damn thing to stop Mia’s rampage, and as far as I could tell, the only reason another banshee got involved was b/c she wanted Mia’s child (Holly). If there had been no Holly, I’m not convinced they would have gotten involved at all.

Banshee shenanigans aside, LOTS more Big Things are going on.<——it’s kind of a trend at this point, yes?

Ford (the maybe human empath) discovers that there’s a ghost in the church, and Rachel figures out that she can see the ghost, if they’re both standing in a ley line at the same time.

Until Al shows up and snatches the ghost. Demons apparently have ways of getting a new body for a ghost, and this isn’t just any ghost, no, it’s the ghost of Gordian Nathaniel Pierce, aspiring killer of demons. Al’s pretty sure he can make quite a bit of money selling Pierce as a familiar.

Which, of course, makes Rachel lose her mind. Underdog and all that.

Oh. And Rachel gets SHUNNED. I’m not sure why. At first I thought it was all of the very public confrontations with demons, but now I think it’s b/c of something else that doesn’t become an issue until the next book, so not telling.

And finally, in the showdown with Mia, Rachel remembers what happened thatnightwedonotspeakof. When she remembers, Rachel loses her mind again, and as a result something happens with her and Ivy and their auras that I’m pretty sure is going to turn out to be HUGELY important in the final book.

AND that, my friends, is why I reread these long-running series before the last book comes out. There’s still time. You’ve got six weeks. Just sayin’ . . . *wink*

In New York Times bestselling author Kim Harrison’s most complex and nuanced adventure yet, bounty hunter and witch Rachel Morgan fights a deadly battle – mind, body, and soul.Black Magic Sanction
Rachel Morgan has fought and hunted vampires, werewolves, banshees, demons, and other supernatural dangers as both witch and bounty hunter – and lived to tell the tale. But she’s never faced off against her own kind…until now. Denounced and shunned for dealing with demons and black magic, her best hope is life imprisonment – at worst, a forced lobotomy and genetic slavery. Only her enemies are strong enough to help her win her freedom, but trust comes hard when it hinges on the unscrupulous tycoon Trent Kalamack, the demon Algaliarept, and an ex-boyfriend turned thief. It takes a witch to catch a witch, but survival bears a heavy price..

So check this out.

Rachel and Ivy are minding their own business, doing a bit of grocery shopping, when this blonde chick in a frumpy suit starts making eyes at Rachel.

Or so she thinks.

Except Frumpy isn’t checking Rachel out! Frumpy is a member of the coven of moral and ethical standards, and she’s trying to take Rachel into custody.

Pfft. Like that’s going to happen. But the attempt does make quite a mess (one word—PRODUCE). And wait a minute, what’s going on? Yeah, Rachel’s been shunned, but there’s a world of difference between shunning a witch and actively pursuing her.

A couple of books ago, Rachel very sneakily stole Al’s summoning name so he couldn’t be called out of the Ever After and let loose on her or her loved ones. They’ve since resolved their issues . . . *snorts* mostly . . . but Rachel still has his name.

And that is how we find out not only can Rachel’s blood kindle demon magic, but she can also be summoned like a demon, and my, doesn’t that complicate things.

Especially when the previously thwarted coven of moral and ethical standards becomes privy to this information, using it to, yes, summon Rachel.

It also makes her angry.

It makes me angry too, b/c guess who summoned Rachel for the straight-laced coven (whose members would rather DIE than have a bit of smut on their auras)? Go on . . . guess . . . I’ll give you hint—his name has four letters, and is also slang for stealing, which is ironic, b/c that’s what he does.

YEP. Nick just can’t stay gone. Which is unfortunate, b/c I HATE HIM. *takes a calming breath*

Black Magic Sanction is my favorite book in the series up to this point. Al and Rachel grow in their new roles as teacher and student, and Rachel finally shows some caution on the romance front. Trent is consistently NOT evil, and even shows that he values Rachel as a person. (<——YES!!) And Rachel finally starts to accept what she is, understanding that it’s who she is that matters. LOVE it. Love it ALL.