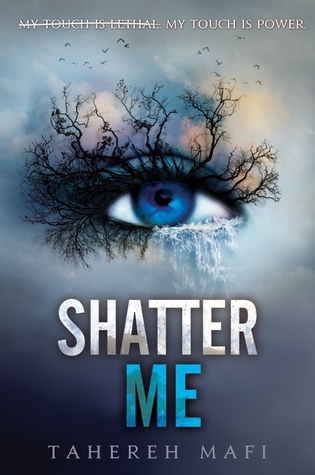 I have a curseI have a giftI am a monsterI'm more than humanMy touch is lethalMy touch is powerI am their weaponI will fight backJuliette hasn’t touched anyone in exactly 264 days.The last time she did, it was an accident, but The Reestablishment locked her up for murder. No one knows why Juliette’s touch is fatal. As long as she doesn’t hurt anyone else, no one really cares. The world is too busy crumbling to pieces to pay attention to a 17-year-old girl. Diseases are destroying the population, food is hard to find, birds don’t fly anymore, and the clouds are the wrong color.The Reestablishment said their way was the only way to fix things, so they threw Juliette in a cell. Now so many people are dead that the survivors are whispering war – and The Reestablishment has changed its mind. Maybe Juliette is more than a tortured soul stuffed into a poisonous body. Maybe she’s exactly what they need right now.Juliette has to make a choice: Be a weapon. Or be a warrior.


I’ve been in a little bit of a reading funk. Over the past month or so I’ve started and stopped reading so many books it was just driving me crazy. I finally decided to start Shatter Me. I’ve had it on my NOOK for a while now, but I thought it was time to start it. And I’m so glad I did!! I was hooked from page one. I was so happy that I finally found a book that didn’t make me want to throw it at the wall. This book was just completely mesmerizing. The story line, the characters, the relationships, the love & the tragedy; it all just fit so well together.

People used to want hope. They wanted to think things could get better. They wanted to believe they could go back to worrying about gossip and holiday vacations and going to parties on Saturday nights, so the Reestablishment promised a future too perfect to be possible and society was too desperate to disbelieve. They never realized they were signing away their souls to a group planning on taking advantage of their ignorance.
Their fear.

Juliette didn’t have a normal childhood. From a young age she learned that her touch hurts people, can even kill them if she touches them for too long. Her parents treated her like a monster. She accidentally killed a young boy when she was trying to save him. So one day her parents let the Reestablishment take her and put her in an asylum where she couldn’t hurt anyone else again. (The Reestablishment is like the government. I’m not sure what time period this is, it doesn’t specify, but it’s sometime in the future. The seasons eventually went away. There is no more animals, no crops. So the Reestablishment controls the public, gets them to do things so they’ll get food or shelter in return.)  She was in a cell by herself for a year. No real food, no one to talk to. The guards open the doors maybe once a day so she can use the bathroom and shower, but she has to find her way to the bathroom in the dark. (It’s a really messed up place!) Then one day, she gets a roommate. Adam Kent. (Swoons!) And she knows this boy. They went to the same school. He always stood up to the others kids for her when they made fun of her about her “disease”. But he is there under cover for the Reestablishment. The head guy for that sector, Warner, wants to use her as a weapon.

My lips will stay shut with the secrets of this morning forever but my heart is so full of confidence and wonder and peace and possibility that it’s about to burst and I wonder if it will rip the dress.

Not too long after Adam comes in, guards come to take Juliette to Warner. He’s a really evil person. He’s 17, but his father lets him run the sector while he’s off doing other things. But Juliette actually has a room, with a real bed, and clothes. Her own bathroom with a shower and hot water. But it sickens her to use it when someone so evil has given it to her. She doesn’t want to hurt people. Warner forces her to test her “powers” on a couple people and it makes her really angry. But she finds refuge with Adam. Adam has loved her since they were kids. Warner has assigned Adam as her guard who watches her almost all the time and they get really close. She finds out that she can actually touch Adam and it doesn’t hurt him. She can finally feel what its like to be touched by someone else and them not get hurt. They make plans to run away together to a place Adam has as a secret. There are some others who aren’t really in Warner’s army like he thought, but I don’t want to ruin it for you and tell you who it is! There is a lot more that happens towards the end but it’s the best part and I just can’t tell you. But, it’s a happy ending…so far! 🙂

For a moment we’re just staring at each other, breathing hard until I’m blushing, until he closes his eyes and takes one ragged, steadying breath and I place my hand on his chest. I dare to trace the outline of the bird soaring across his skin, I dare to trail my fingers down the length of his abdomen.
“You’re my bird,” I tell him. “You’re my bird and you’re going to help me fly away.”

30 responses to “Review: Shatter Me by Tahereh Mafi”