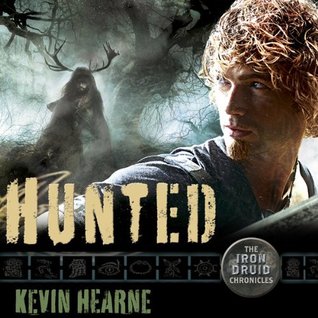 For a two-thousand-year-old Druid, Atticus O’Sullivan is a pretty fast runner. Good thing, because he’s being chased by not one but two goddesses of the hunt—Artemis and Diana—for messing with one of their own. Dodging their slings and arrows, Atticus, Granuaile, and his wolfhound Oberon are making a mad dash across modern-day Europe to seek help from a friend of the Tuatha Dé Danann. His usual magical option of shifting planes is blocked, so instead of playing hide-and-seek, the game plan is . . . run like hell.

Crashing the pantheon marathon is the Norse god Loki. Killing Atticus is the only loose end he needs to tie up before unleashing Ragnarok—AKA the Apocalypse. Atticus and Granuaile have to outfox the Olympians and contain the god of mischief if they want to go on living—and still have a world to live in.

Don’t miss Kevin Hearne’s novella “Two Ravens and One Crow” in the back of the book.

I first discovered how amazing this series was in audio at the end of November of last year, and I’ve been listening to a book every two weeks ever since. And, as much as I’ve enjoyed each new installment, I haven’t had the urge to say “holy shit that was good” since HOUNDED, until now. I may even go so far as to say that I have a new favourite IRON DRUID novel! HUNTED took off running (literally—well, Atticus, Oberon & Granuaile did anyway) and continued to gain momentum with every page. The stakes are higher than ever, Hearne continues his indiscriminate secondary character killing spree, and this series receives a fresh injection of intrigue. Ooh how I am going to miss Luke Daniels’ voice in my ear between now and June when SHATTERED hits shelves.

This audiobook has the most “omg I can’t believe Hearne just did that” moments to date. One of the things I love most about this series is the author’s willingness to do the unexpected. He’s not afraid to piss readers off by rocking the boat a little. Of course, my heart breaks every time a beloved side character bites the dust, but I respect Hearne for having the balls to go there. I REALLY want to talk about the who/why surrounding this latest fatality, but it’s a major spoiler so I’ll resist. Atticus’ life is usually on the line as well and even more so in this installment, so hold on to your pants because this listen is seriously wicked!

For the first time, there are some scenes written from Granuaile’s POV, and Oberon is font-and-center more than usual too due to some extenuating circumstances. I’ve been dying for more 1-on-1 with both of these characters, so I was ecstatic that the author delivered on all fronts. Originally I thought that the Forest of Hearne was a clever cameo appearance, but as it turns out, it’s actually an English folklore. As usual, the mythology is rich and varied, and the humour continues to be pee-your-pants funny. It’s ill-advised to listen to these audiobooks in public because YOU WILL laugh out loud.

Luke Daniels’ narration skills are put to the test yet again with a larger number of female scenes, several different languages, and Ahriman’s cackle borderline purr. Every line is read like it’s the most important one, and I’m seriously beginning to think that there’s nothing this guy can’t do audiobook-wise. He’s definitely my favourite male narrator. Daniels remains consistent from book-to-book, is well-suited to Kevin Hearne’s writing style, and brings something extra to this series that’s all his own.

HUNTED’s epic-ness will blow your freaking mind, and have you shouting ATTICUS IS THE MAN! He has a charm for everything, he really does. This is an auto-buy series, by a very talented author, with a superstar narrator; do you need another reason to listen to this audiobook? I didn’t think so.

Was this review helpful to you? Please consider voting for it on Amazon!