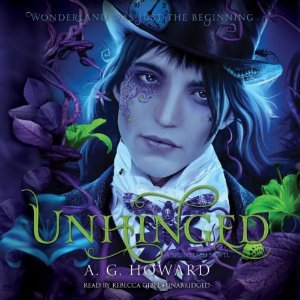 Alyssa Gardner has been down the rabbit hole. She was crowned Queen of the Red Court and faced the bandersnatch. She saved the life of Jeb, the boy she loves, and escaped the machinations of the disturbingly appealing Morpheus. Now all she has to do is graduate high school.

That would be easier without her mother, freshly released from an asylum, acting overly protective and suspicious. And it would be much simpler if the mysterious Morpheus didn't show up at school one day to tempt her with another dangerous quest in the dark, challenging Wonderland - where she (partly) belongs.

Could she leave Jeb and her parents behind again, for the sake of a man she knows has manipulated her before? Will her mother and Jeb trust her to do what's right? Listeners will swoon over the satisfying return to Howard's bold, sensual reimagining of Carroll's classic.

The phenomenal cover art by Nathalia Suellen and the ALICE IN WONDERLAND angle were the two main factors that prompted me to take-up this series last year. However, I had some concerns about its staying power after the first installment because there are only so many twists Howard can make on Carroll’s original tale. UNHINGED differs greatly from book one in that this story takes place in the human world, and the focus is more on the love triangle rather than on the wackiness of Wonderland. I enjoyed Rebecca Gibel’s narration and the ending will definitely leave you reeling, but this novel just didn’t manage to hold my interest the way that SPLINTERED did.

A.G. Howard’s descriptive writing style remains the star of this series with her detailed characterizations of the countless odd creatures that make up this bizarre universe. In this installment we get to meet the Sisters Twid, lots of creepy Tulgey Wood toy rejects, and too many creepy crawlies to count. I loved the author’s depictions of Al’s skater girl wardrobe, and Morpheus’ unique buggy fashion sense; even though at times I found that they did halt the momentum of the plot. I enjoyed the THROUGH THE LOOKING GLASS references, and thought that Howard did a good job of incorporating them into her world.

The love triangle was definitely at the forefront of this story which I wasn’t overly thrilled about. There’s not much meat to this book’s plot line, and when paired with heavy descriptions and Al’s romance dilemma, I found that the novel lagged quite a bit. I can understand why UNHINGED received mixed reviews because if it wasn’t for Gibel’s narration, I probably would have struggled more with this one than I did. I liked the concept of Gardner having the chance at two lives but had a hard time understanding her commitment to Jeb. I understand that he’s human and that a lot was asked of him in this novel, but he definitely didn’t win any popularity contests with me.

Rebecca Gibel is undoubtedly a talented narrator because if she can make this Young Adult / love triangle cynic actually enjoy these elements—then that’s really a testimony in itself! She does a great job of handling all of the madness that the author throws her way while breathing life into this book’s lengthy details. I especially liked her rendition of Morpheus; I think Gibel does all of the characters justice, but him especially. If you’re considering reading this series, I’d advise you to listen to it instead because the narration makes a world of difference.

It seemed as though A.G. Howard left all of the craziness for the very end because after a rather uneventful twelve hours, the last stretch is one big “oh shit” moment. There’s a pretty major cliff hanger as well which leads me to believe that readers will find themselves revisiting Wonderland in ENSNARED. One can only hope!