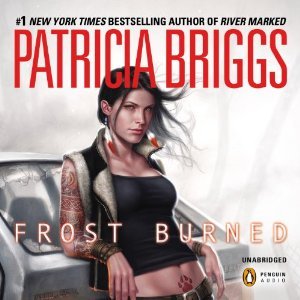 Mercy Thompson’s life has undergone a seismic change. Becoming the mate of Adam Hauptman—the charismatic Alpha of the local werewolf pack—has made her a stepmother to his daughter Jesse, a relationship that brings moments of blissful normalcy to Mercy’s life. But on the edges of humanity, what passes for a minor mishap on an ordinary day can turn into so much more…

After an accident in bumper-to-bumper traffic, Mercy and Jesse can’t reach Adam—or anyone else in the pack for that matter. They’ve all been abducted.

Through their mating bond, all Mercy knows is that Adam is angry and in pain. With the werewolves fighting a political battle to gain acceptance from the public, Mercy fears Adam’s disappearance may be related—and that he and the pack are in serious danger. Outclassed and on her own, Mercy may be forced to seek assistance from any ally she can get, no matter how unlikely.


Well, it’s been a long time in coming but I am now officially caught-up on the MERCY THOMPSON series. And, what a ride it has been! This latest installment threw me through a loop with its countless twists and turns, the story starts off in one direction only to end in a completely unexpected way. All of Briggs’ fabulous secondary characters come out to play in FROST BURNED, and you don’t really figure out how this book got its title until the plot comes full circle in a brilliant OOHH moment in the final chapters.

The previous novels in this series have all revolved around a specific group of supes, but this one showcases all of them which was a real delight. At first glance, this story seemed to be about the werewolves, which surprisingly turned out to be a clever sleight of hand on Patricia Briggs’ part. The furry plot line in itself is masterfully crafted, but when combined with the unpredictable curve balls, you can’t help but take a moment to admire the big picture once it’s finally revealed. I read a lot of Urban Fantasy, and as a result, I have become fairly proficient at predicting possible outcomes—so when FROST BURNED managed to take me unaware; I was happily dumbfounded.

I was thrilled that Stephan, Tad, Zee, Sophia, Gabriel and Marsilia, all had roles to play in this book. And, I was beyond pleased that we finally get to meet the infamous Moor in this installment. He’s an ancient werewolf sent by Bran who’s a little (ok, a lot) off his rocker, and I absolutely LOVED his character! So unpredictable and… primal. Mercy and Adam are as amazing as ever; I think this is one of the rare series in this genre where the main couple isn’t dysfunctional. Their relationship is such a breath of fresh air, and just one reason on a list of many that keeps me coming back for more. This novel isn’t without its heartbreaking moments though; I can’t help but mourn the loss of Thompson’s VW Rabbit. This car is such a huge part of her identity that I’m secretly holding out hope that Zee will be able to magic it back to life.

After listening to RIVER MARKED, I was on the fence as to whether Lorelei King was the right narrator for this series, but after this installment, there’s not a doubt left in my mind that she’s the right woman for the job. She mirrors Mercy’s emotions beautifully, and seamlessly shifts between the various characters. King knows when to pour on the snark, and when to let Briggs’ writing speak for itself. I used to think of her as strictly being CHARLEY DAVIDSON, but she’s more than proved her versatility with her narration of these audiobooks.

FROST BURNED is a great installment in an even greater series! Although, there is one downside to finally being caught-up… having to actually wait for the next book.