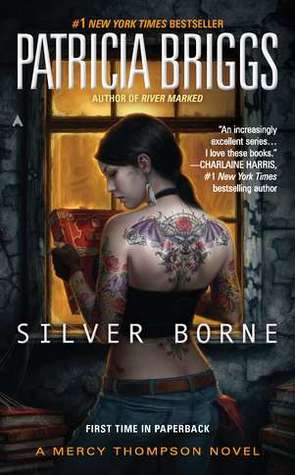 When Mercy Thompson, mechanic and shape-shifter, attempts to return a powerful fae book she previously borrowed in an act of desperation, she finds the bookstore locked up and closed down.

It seems the book contains secrets -- and the fae will do just about anything to keep it out of the wrong hands. And if that doesn't take enough of Mercy's attention, her friend Samuel is struggling with his wolf side -- leaving Mercy to cover for him lest his own father declare Samuel's life forfeit.

All in all, Mercy has had better days. And if she isn't careful, she may not have many more...

For the past few installments, Mercy’s been having a rough go at it and things don’t look like they are going to improve anytime soon. I’m relieved that Thompson is still reeling from the after effects of what happened in IRON KISSED because, in my opinion, that’s something that takes time to recover from. However, I think her damaged state is beginning to take away some of the enjoyment that I’d otherwise be getting out of this series. It’s kind of a damned if you do, damned if you don’t type of situation. The sad tone of these books is getting to me and I’m starting to become frustrated with the lack of a resolution on any front. I don’t expect Mercy to get her HEA anytime soon but I would like her and Adam to be ok, or for her life in the pack to stabilize, or just… something to help balance out all of the bad.

Samuel was by far my favourite character in SILVER BORNE; for reasons that I won’t list because of spoilers, he spends most of this novel as a wolf which helped ensure that there were plenty of furry moments in this story’s fae driven plot line. In Briggs’ universe, werewolves’ dual natures actually have two separate identities and the author further differentiates them by having Mercy call his wolf “Sam”. I loved watching Thompson’s upbringing kick-in; she always watches her behaviour around alphas but doubly so in this case because of Samuel’s temporary lack of humanity. His refusal to shift also causes some rather entertaining moments like when a little girl mistakes him for a dog and tries to ride him like a pony. The look on Mercy’s face must have been priceless!

As I mentioned previously, Thompson is still struggling to keep her head above water―between dealing with her personal issues, adjusting to her new mate bond and overcoming the hostility directed at her from the pack―she just can’t seem to get a break. I adore Adam, he made my list of top fictional book boyfriends of 2013, and I think they are well-suited for each other, if only outside forces would quit adding to their problems long enough for them to catch their breath. This is Urban Fantasy, so I don’t expect flowers and chocolate, but how long must we wait for a conflict-free installment? I don’t expect happily-ever-after just happy-for-right-now.

This book’s plot line is as action-packed as ever and I like how the author is constantly switching her focus from one paranormal group to another. It helps keep the story fresh and means that there’s always something new to learn in each novel. The mystery surrounding the book that Mercy loaned transformed this installment into a real page turner but admittedly, I was a little saddened when Gabriel got dragged into the supernatural world. I was really hoping that Thompson would get to retain some normalcy in her life. But, now that both her trailer and her only human friendship have gone up in smoke; I fear that there’s to be no light at the end of the tunnel for Mercy anytime soon.

Patricia Briggs delivers another solid installment with SILVER BORNE; albeit, a little darker than usual. I’m excited to read RIVER MARKED as I suspect that a few new walker secrets are about to be revealed!