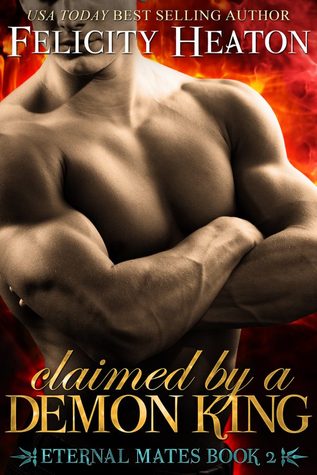 The moment the demon King Thorne of the Third Realm set eyes on the mortal huntress Sable, he knew she was his fated one. The fiery, dangerous female awakened hungers he had never experienced before, a dark craving and passion that has consumed him in their time apart. As the lunar cycle wanes, she enters his world again and nothing will stand in the way of him claiming his forever with her—not the relentless assault from the Fifth Realm or the dark elf male determined to seduce her out of his grasp.

Intent on achieving the coveted position of commander at Archangel, Sable leads her small team into the dark underworld and the Third Realm, to a war where her allies are the very creatures she normally hunts—vampires, werewolves, and demons. Her eagerness to lead the deadly mission has everything to do with winning her promotion, and nothing to do with the kingdom’s brash, lethally seductive demon king—a king who stirred fierce desire and wildfire heat in her with just a look and an innocent touch when they first met, and has been in her wicked dreams ever since.

As the gathering storm between rivals unleashes irresistible passion that flares white-hot and the heat of the battle brings life-shattering realisations, can Sable place her duty before her heart? Or will she surrender to her deepest desires and be claimed by a demon king?

The romance in CLAIMED BY A DEMON KING felt a bit like a caveman trying to woe a modern day woman, and as odd as that may sound, it actually works well when paired with vampires, werewolves, and elves. Thorne is hella sexy with his retractable horns, impressive wingspan and sharp claws, and Sable brings a whole new meaning to the expression “good things come in little packages.” I enjoyed the back-and-worth between this unlikely couple, learning more about Felicity Heaton’s demon realm, and that the last three-quarters of this book is one big supernatural free-for-all. Yes, this story has a little something for everyone.

One of my favourite things about starting any new series is the world-building; in KISSED BY A DARK PRINCE we learned about the elves that make up Heaton’s ETERNAL MATES universe, and book 2 is all about Hell a.k.a. the demon realm. I liked how everything in Thorne’s kingdom felt larger than life; from his castle, to his army, to the man himself. I was surprised to learn that there are no demon females and that their fated ones are usually mortal. It was an interesting way to make a three thousand year old virgin believable and helped add a vulnerable side to these seemingly invincible preternaturals. I was also super fascinated by the king’s horns, they are in constant flux, and I couldn’t help but think dirty thoughts every time the author referenced them.

It’s not very often that I fall instantly in love with a fictional character, and a secondary one at that, but there’s just something about Bleu—he’s arrogant, unapologetic, and manipulative. Given the title of this book, I knew that Thorne and Sable were going to end up together, but it was fun watching the elf compete for the heroine’s affections. Even more characters get added to the mix in this novel, including Grave and Night which have to be some of the most ironic vampire names ever but made for a few interesting jokes. Snow from Heaton’s VAMPIRE EROTIC THEATRE series also makes a cameo appearance; I haven’t tackled these novels yet but after meeting this savage animal, I’ll definitely be rectifying that sooner rather than later.

I like how both of the main characters were hardcore alphas, and that neither of them wanted to give an inch, even for love. In this world, a couple knows they are eternal mates when they start having naughty dreams about each other so even though the sex was a long time in coming, there’s still plenty of sultry dream scenes to keep Paranormal Romance readers satiated. Thorne quickly endeared himself to me with his willingness to do things Sable’s way which for a king, seems like a pretty impressive feat in itself. The huntress went through an equally life-changing transformation from demon slayer to future queen of her enemies, and a few shocking truths from her past helped to complicate things even further along the way.

Epic demon battles, surprise allies, and, fun cameos, made this book an all around fab read. CLAIMED BY A DEMON KING will leave you hoping that there is a Hell, and that Thorne has a brother!

Did you found this review helpful? Please consider voting for it on Amazon!

16 responses to “Review: Claimed by a Demon King by Felicity Heaton”