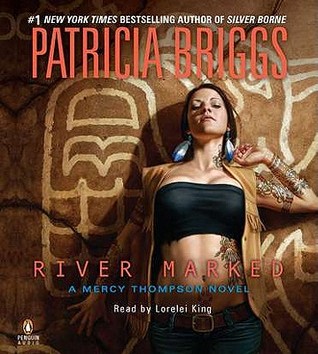 Car mechanic Mercy Thompson has always known there was something different about her, and not just the way she can make a VW engine sit up and beg. Mercy is a shapeshifter, a talent she inherited from her long-gone father. She’s never known any others of her kind. Until now.

An evil is stirring in the depths of the Columbia River—one that her father’s people may know something about. And to have any hope of surviving, Mercy and her mate, the Alpha werewolf Adam, will need their help…

As much as I enjoy the MERCY THOMPSON series, the last few books have been rather dark, although I understand that Briggs is staying true to her character, as a reader I’ve been wanting the old Mercy back. In the opening chapters Thompson cracks a joke about that-horrible-thing-that-happened-to-her which I took as a good sign, this is also the quasi-essential “vacation” installment—another clear indication that the heroine is finally ready to move. It’s worth mentioning that this is the first time I’ve listened to one of these novels in audio, and Lorelei King’s narration was also a big factor in lightening up the story line. RIVER MARKED is all around entertaining with great Mercy/Adam moments, a formidable big bad to defeat, and Coyote the trickster god wreaking havoc on all fronts.

Vacations never go as planned in Urban Fantasy, if anything, they usually blow-up spectacularly which is exactly what happens in this book, only instead of explosions its otter kin and a river devil, but we’ll get to that. Luckily there’s a bit of calm before the storm. Mercy and Adam finally seem to have accepted their bond; I liked how lovey-dovey they were to each other in this installment, and I absolutely adored how Briggs gives them a mini-HEA before the Columbia River tries to eat them. There’s also a goodbye letter from Mercy to Adam in case their plan fails and she dies which Briggs cruelly reveals at the very end, and it will make you bawl your freaking eyes out. It’s beautiful and sad, and I want to listen to it again.

RIVER MARKED is the first novel that actually revolves solely around Mercy’s heritage which I loved. We learn more about her Native American roots including info about her deceased father, what she really is, and how Coyote fits into the mix. There’s also some interesting mythology surrounding the river devil; my favourite was the real reason a beaver’s tail is flat. According to the lore, after eating a bunch of people the monster was defeated from the inside, and when the beaver escaped through the creature’s butthole his tail got smushed. Seeing how this rodent is practically Canada’s mascot, I couldn’t help but giggle at this.

I rarely switch back-and-forth between reading and listening to a series because typically I prefer to pick a format and stick with it. So I really didn’t know what to expect from this audio when I jumped-in at book 6, but when I found out that Lorelei King was the narrator, I knew that it just had to be good. Listening to Mercy is very different than reading her, however I enjoyed the bubbly tone that King brings to Thompson’s POV. Her delivery helped draw attention this installment’s lighter tone, and gave me a whole new appreciation of how sarcastic one of my favourite heroines truly is. Although, in my opinion, her narration may have been a little too happy-go-lucky for this protagonist; I’m going to listen to FROST BURNED as well before I pass judgment.

RIVER MARKED is the ray of sunshine that this series needed with borderline epic action scenes, and enough mushy moments to make readers fall even further in love with the Mercy / Adam duo.