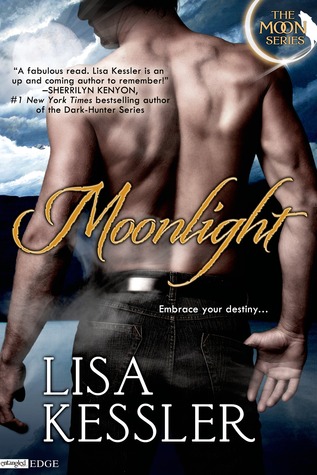 Lana Turpin doesn’t realize she’s a moving target. Raised in the foster system, she only knows that she blacks out during the new moon and wakes up without remembering a thing. But now she’s being tracked by some strange organization that wants her back—even though she’s never stepped foot inside their compound. And the stranger across the diner is watching her like an enemy.

The first book in Lisa Kessler’s Moon series is quick to please with its elaborate werewolf lore, dual points of view and flash fire romance but it also isn’t without its faults. There are a few holes in the mythology that were difficult to miss and the insta-love between the main characters was a little to instant for my tastes. That being said, the ending left me with enough unanswered questions to make my reading of Hunter’s Moon a forgone conclusion.

I enjoyed Kessler’s writing style; each chapter alternates between Adam and Lana which made for a nice mix of both male and female points of view. For the most part I liked the urgency of this book’s tone and the plot line is relatively fast paced although there are a couple of long, unnecessarily drawn out scenes that caused the story to stagger at times. The author does an excellent job of developing the secondary characters and of setting-up the romance that will be featured in the next installment. There’s a whole pack of wolves to choose from so I’m definitely expecting that there will be plenty more where Moonlight came from!

The werewolf mythology is rich and well-crafted; I especially enjoyed the male twin aspect and the way that the author worked it into the story line. Most of the same rules seem to apply to the jaguar shifters as well aside from the obvious cat / dog differences. I wish that the characters had spent a little more time in their animal forms; other than in the opening and closing chapters, I don’t think any of them really shifted. That’s a waste of this book’s main paranormal element in my opinion. There’s also one aspect of the lore that really nagged at me. When readers first meet Lana it’s a few days before the full moon and we find out that a) she doesn’t know she’s a jaguar and b) she has been shifting for years but blacks out every time. Later on, the author puts a lot of emphasis on the futility of resisting the pull of a full moon. But then in the last chapters, Adam (who’s not only an alpha but has known he’s a werewolf all his life) is unable to resist the call yet Lana (a total newbie) remains unaffected. Do you see what I’m getting at? It just doesn’t add up.

Both of the main characters earned my stamp of approval early on. Adam is an up-and-coming pack leader with a good head on his shoulders and Lana has done well for herself all things considered. The former quickly jumps on the “mate” bandwagon despite his player status while as the latter needs a bit more convincing; her trust and abandonment issues definitely play a huge part in that. Overall, the sex scenes are explicitly detailed and the romance is enjoyable just so long as you’re willing to overlook the insta-love that’s so common in werewolf Paranormal Romances.

Aside from a few minor bumps, Moonlight is a great starting point for a series that can only get better from here.