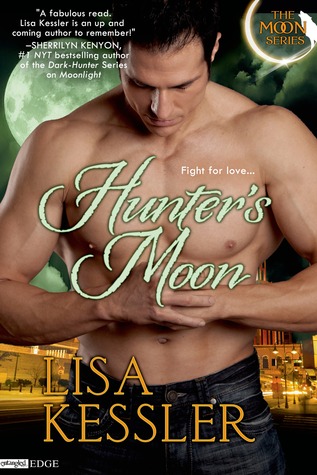 Sasha’s future was stolen from her the moment she was bitten. Now she's on the run from the Nero Organization that transformed her from a human detective into a shape shifting jaguar assassin.

When a rogue bounty hunter threatens her younger sister, she'll be forced to fight, and with nowhere else to turn, Sasha will need to trust the one man who has every reason to want her dead.

Aren is a werewolf with a secret. While protecting his twin brother and Alpha of the Pack, he found his one mate for life. Sadly she's also the jaguar assassin who tried to kill them both. Now Aren is struggling between his animal nature to love and protect her, and his loyalty to the Pack.

I enjoyed Hunter’s Moon quite a bit more than book 1; it helped that I already had a feel for Kessler’s wolves and the history between the main couple definitely helped make this installment’s insta-love romance more believable. The Nero plot line continues to add intrigue and an element of danger to this series’ story arc which means that there’s plenty of action on both sides of the bedroom door. All-in-all, another solid werewolf book from Lisa Kessler!

This novel picks-up not too long after Moonlight and I thought that the author did a good job of bringing readers up-to-date on the latest Sloan Pack news. Adam and Lana are now the proud parents of twins and I appreciated that there was a nice continuation to this series’ overall story arc. I liked how the Nero organization shifted its focus from one heroine to the next and was pleasantly surprised by some of the twists along the way. The kinks in the werewolf lore that bothered me in the first installment seem to have also been ironed out which was a definite bonus as well. There’s been real growth from book-to-book and I hope that this trend continues with each new addition.

Aren and Sasha drew me in faster than Kessler’s previous romantic duo; I think them having a backstory definitely helped to establish better chemistry. I’m also really enjoying the set-ups for each book. They get me psyched about reading the next installment and lo and behold, already I find myself looking forward to Gareth and Nadya’s tale! Sasha’s character is especially well-developed; not only does she kick some serious ass but she’s also an emotional wreck which makes her and Aren’s relationship interesting to say the least. I’m definitely diggin’ that the mate bond only seems to affect the males (so far) because it’s refreshing to see alpha werewolves falling all over the women for a change.

The main romance runs hot and cold but in a good way; the drama wasn’t overdone but did help to add a nice level of conflict to the relationship. This series definitely has a high steam factor and fortunately, Kessler doesn’t skimp on any of the delicious details which is always a plus in my opinion. I loved the way the author created a happily-ever-after that was right for Aren and Sasha rather than the customary white picket fence finale. The ending left me feeling satisfied and anxious for the next installment.

Hunter’s Moon is an addictive read that’s sure to get you hooked on Lisa Kessler’s werewolves.