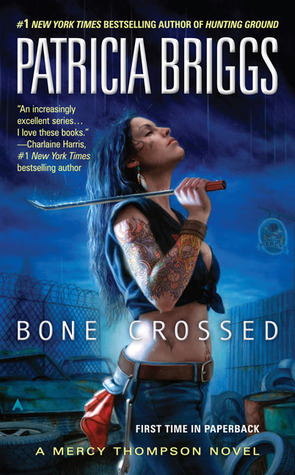 By day, Mercy is a car mechanic in the sprawling Tri-Cities of Eastern Washington. By night, she explores her preternatural side. As a shapeshifter with some unique talents, Mercy has often found herself having to maintain a tenuous harmony between the human and the not so human. This time she may get more than she bargained for.

Marsilia, the local Vampire Queen, has learned that Mercy crossed her by slaying a member of her clan—and she's out for blood. But since Mercy is protected from direct reprisal by the werewolf pack (and her close relationship with its sexy Alpha), it won't be Mercy's blood Marsilia is after.

It'll be her friends'.

This installment picks up right where the last one left off and by right I’m talking like one split second later. Well, let’s just say that things don’t go quite as I had envisioned them. In Bone Crossed Mercy is still recovering from what went down in Iron Kissed so she’s not her usual spunky self and unfortunately for her, things aren’t really looking all that up either. In book 4 Briggs finally sheds a bit of light on one very important unanswered question and seriously, Adam Hauptman is just SO freaking awesome in this installment!

Bone Crossed has a much darker tone than its predecessors and it also felt like a stepping stone to the next phase of this series. Mercy’s finally solved her relationship dilemma but instead of running into her beloved’s arms she’s trying not to scream every time someone touches her. I felt so horrible for Thompson in this installment; she’s hurting bad and unfortunately for her, the only cure is time. In other news, the reason why vamps are so afraid of walkers is finally becoming clearer and Thompson takes her newfound powers for a test drive. I’ve been anxiously waiting for this aspect of the story line to develop and I can’t wait to see how much more butt Mercy is going to kick in Silver Borne!

I really liked Chad, Amber’s son. He’s a brave kid who’s similar to Thompson in a lot of ways and I loved their interactions. The child challenged her at every turn and I liked that Mercy treated him as an adult and also worked at earning his trust. Stefan lost a few points with me in this book; I found his behavior to be a little suspect and now I’m kind of glad that he was never a real contender for Mercy’s affections. Better the devil you know… unless they are a vampire!

The romance between Adam and Thomson is tender and sweet which was not at all what I expected from an alpha werewolf! Hauptman is so incredibly patient and understanding of Mercy’s needs; it just made me love him even more! I’ve enjoyed watching their relationship grow and change over the past four books and hope that they’ll get a bit of a break in the next novel because they need time to reconnect. And, ya know, I also need some Adam sexy time!

After finishing Bone Crossed my only thought is: thank goodness book 5 is already waiting for me on my shelves!