Let’s talk about dragons in heat…

Twice every three years, unmated dragons like drop dead sexy Stig go into heat. He’ll experience nine nights of raging lust and uncontrollable desire as his inner beast desperately searches for his mate—and Cora, the one woman he can’t have but desperately wants, has stumbled right into the middle of it.

Cora has been fighting her attraction to Stig for years so she thinks her super sexy dreams starring him are just a side effect of her overactive (and very naughty!) imagination. Little does she know it’s actually his primitive dragon side seeking out his mate…

[quote]Wrapped in the warmth of the comforter, Cora felt her fear melt and exhaustion take hold. The last four days had been incredibly long. Sleep, she needed lots of sleep.


Cloaked in the welcoming arms of Morpheus, Cora experienced the most vivid dreams of her life. She was asleep and yet so incredibly aware. Her synapses fired rapidly and amplified every sensation. Touch, smell, taste—they were so very strong.


In her dreams, Cora became aware of a male presence. His scent, a potent mixture of cedar and earth and sweat, teased her nose. Like an aphrodisiac, the smell provoked an aroused state. Her nipples tightened into hard peaks pressing against the simple cotton of her camisole. Her sex pulsed as desire blossomed in her belly and spread its warm tendrils of electric current through her lower half.


There was no stopping the downward movement of her hands. They outlined her curves, taking time to tweak her nipples beneath the thin fabric before sliding even lower. Her fingers slipped beneath the elastic waistband of her pajama bottoms and panties and slowly drew them free.


Undressed from the waist down, Cora sat up against her pillows and opened her thighs. Cool air met the blazing hot skin of her most intimate region. Wet and slick, the tender folds of her pussy yielded to the gentle parting of her fingers. Her throbbing clit begged for attention. With the tip of her forefinger, Cora stimulated the swollen nub in lazy circles.


Big and burly, the man loomed naked in the doorway and bathed in shadows. The sight should have terrified Cora but she found it oddly thrilling. There was something so sexy about a little exhibitionism. Moonlight spilled through the window and splashed across his lower half. His magnificent cock, so thick and erect, betrayed his obvious interest. Although she couldn’t see his eyes through the darkness, she could feel his heated gaze locked on her. It swept along her body, leaving a prickly sensation of awareness.


Cora watched in fascination as the naked man fisted his meaty hand over his stiff length. Wanting to give him quite a naughty show, she licked her upper lip and moaned loudly. She arched into the tantalizing touch of her circling finger. The fingers of her other hand found their way between her lips and into her mouth. She ran her tongue over the skin, slicking it with her saliva, and then slipped them inside her tight, hot channel.


A gasp sounded from the doorway. So he liked that, did he?


She moaned and swiveled her hips. Her finger thrusts felt so good, the slick cream of her cunt coating her digits. Little sparks of pleasure flickered through her lower belly. Cora’s toes curled against the sheets. Her wrist moved faster as she strummed her clit with more fervor. Mouth agape, Cora pursued her climax.


Still standing in the doorway, her mystery dream lover breathed hard and loud. His forearm rippled as he stroked his cock. Their competing pants echoed in the stillness of the room. Cora wasn’t sure who would come first. It was almost a race to the precipice of ecstasy.


Separated from her partner in exhibition, Cora was suddenly gripped by the desire to touch his sweat-slicked skin, to taste the salty cream now dripping from the blunt head of his cock. She wanted to be held close and caressed like some soft creature. She wanted to feel his soothing breaths against her forehead and hear the reassuring beat of his heart as she slept against his chest.


But none of those desires were to materialize.


As quickly as her dream lover had appeared, he vanished. In the next instant, Cora woke and shot up off her pillow. Trembling and sweating, she sucked in a sharp breath. She wiped a shaky hand down her face. Her thighs clenched with the last tremors of her fading orgasm.


Cora’s cheeks flamed with embarrassment. She’d just had a wet dream in the room next to Stig’s. As a former marine, he was bound to be keenly aware of his surroundings. Had she cried out in her sleep? Oh God. Had he heard her?


Groaning in humiliation, Cora flopped back against her pillow and buried her face in the crook of her arm. How the hell was she going to face him at the breakfast table in the morning?[/quote]

When I’m not chasing after my wild preschooler, I like to write super sexy romances and scorching hot erotica. I share my chaotic home in Texas with my Viking throwback husband, sweet but rowdy daughter, and one very big and slightly neurotic Great Dane.

The last thing dragon shifter Stig Wyvern needs is his dead friend’s kid sister showing up on his doorstep, especially since he’s just minutes away from entering a mating phase. Sharing his isolated house with the young woman he’s desperately lusted after for quite some time is a recipe for disaster.


But Cora Cardenas has nowhere else to go. She’s in deep trouble with some really nasty people and Stig is the only one who can protect her. That he’s deliciously sexy and makes her tingle with the simplest of smiles is an added bonus.


Cora quickly realizes Stig is hiding something from her. To make matters worse, she’s plagued with breathtakingly naughty dreams starring a shadowed lover who bears a startling resemblance to her host. And what the hell is going on in the basement at night?


Stig needs to get Cora out of his house but his inner beast has other ideas. He’s found his mate and she’s not going anywhere. 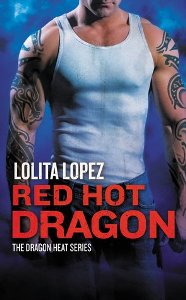 Griffin Cadogan is surprised when Avani Monroe, the sworn enemy of his dragon family, walks into his gym. With his mating phase approaching, the dragon shifter wonders why she risks coming into enemy territory. Yet the dark-eyed temptress shocks him even more with an outrageous demand: She wants him to help her have a baby.


After her mother’s dragon line was annihilated by the Knights, Avani vows to continue her unique dragon breed-and the registries indicate that Griffin is the best candidate. Determined to mate, Avani plans to use her seductive beauty and powerful scent to entice Griffin. The big, strong Welsh man will make for a fitting partner . . . if he doesn’t kill her first.


When they spar over the terms of her proposal, Griffin and Avani can’t deny the intense, primal attraction they feel for each other. But as they become closer to creating a child, the lovers can hear danger encircle them as loud as the clapping of wings. The dragon slayers are coming . . .and they’re gunning for Griffin, Avani, and the entire dragon race.