Today I’m thrilled to have Molly Harper on the blog for Para-RT13! She’s chatting about her upcoming book, A Witch’s Handbook of Kisses and Curses, but I just thought I’d mention that she’s also the author of the incredibly cute Naked Werewolf series and it also has a new installment in the works!

[box]I am a newspaper-reporter-turned-church-secretary-turned-romance-novelist and author of the Nice Girls vampire series and the Naked Werewolf series. (And a few contemporary titles, too.) I was that weird kid that spent way too much time in the non-fiction paranormal studies section of the library. This fascination with the weird stayed with me through adulthood. So when I decided to finally get off of my butt and write a book, it was natural that I would write a vampire story. And because the most popular of my newspaper columns involved me injuring or humiliating myself in some way, I decided to write the most embarrassing way possible to become a vampire. So my heroine, Jane, was fired from her job, mistaken for a deer by a drunk hunter, shot and turned into a vampire in the first chapter.[/box]
[box]I am married to my high school sweetheart, David, who serves as the inspiration for most of my leading men. We have two children and live in our hometown in western Kentucky. [/box]

[box]This is my third RT convention. I love it because as a writer, I get to see the writing friends I only get to visit online face to face. It’s like a big reunion for the writing sisterhood. And as a reader, I get to have squealing fan-girl meltdowns over the authors I love so much. (I’m sorry, Teresa Medeiros.)[/box]

[box]DRESS COMFORTABLY, particularly your shoes. Yes, it’s important to look nice, but for those all-day conference sessions, you want to wear clothes that you can sit, stand, and walk in for long periods of time. Also, make sure you don’t tuck your dress into the back of your panty hose, like I did on the first day last year. (Thank you to the reader who chased me across the lobby to let me know.)[/box]

[box]I will be speaking on the following panels:[/box]
[box]Blood Light (Vampire Humor) – with Cat Adams, Jeaniene Frost, Susan and Clay Griffith, Molly Harper, Jeri Smith-Ready, and Elisabeth Staab. Moderated by Caridad Pineiro.[/box]
[box]The Long Kiss Goodnight- Waiting for That HEA – with Ilona Andrews (Ilona and Gordon Andrews), Molly Harper, Pamela Palmer, Rachel Vincent. Moderated by Jeaniene Frost.[/box]
[box]And I will also help host the VAMPIRE SOCIAL: Meet, Greet and Play, with a bunch of other vampire authors. Please stop to play games and have a bloody Mary![/box]
[box]And in general, I will attending most of the parties and socials. They’re so much fun! Just look for the tall, loud brunette, traveling with her equally loud mother.[/box]

[box]I am such a lightweight when it comes to alcohol, so I try to take it easy. I stick to the sweet stuff like amaretto sours. Sometimes the host hotels come up with specially named cocktails for the conference attendees. That’s always fun![/box]

[box]A WITCH’S HANDBOOK OF KISSES AND CURSES is the latest spin off to my Half-Moon Hollow series. The story focuses on Nola Leary, a witch who searches Jane’s bookshop for four magical objects that will secure her family’s magical legacy. Complication One: Her grandfather was Mr. Wainwright and the artifacts are lost somewhere in what is now Jane Jameson’s book shop. Complication Two: her new neighbor, Jed Trudeau, who keeps turning up half naked at the strangest times, a distraction Nola doesn’t need. And teaming up with a real-life Adonis is as dangerous as it sounds, especially when he’s got the face of an angel and the abs of a washboard—can Nola complete her mission before falling completely under his spell?[/box]
[box]The new book comes out in late May and will be available in print, ebook and audio.[/box]

What would you like to score in the “Goody Room”?

[box]I am a bit more excited what I will be giving away in Promo Lane! I’ve been planning my giveaway items for months! I’m going to have the usual postcards and magnets, but I’ll also have some super-special secret items and bitty booklets previewing HOW TO RUN WITH A NAKED WEREWOLF.[/box]

What authors do you hope have tables beside you at the Giant Book Fair?

[box]Well, we’re in alphabetical order, so the writers who travel the “circuit” usually know who they’re going to sit near. For instance, I am usually next to Fiona Harper or Lynn Raye Harris. It’s nice that we basically get to sit next to each other for a few hours and catch up on what’s happened since the last mass book signing.[/box]

[box]My mom, Judy, is rooming with me. She’s a life-long romance reader. She’s the one who introduced me to the genre so it’s very cool that I get to experience her first conference with her![/box]

[box]Well, clearly the “walking around with my dress tucked into my panty hose” thing ranks pretty low. But last year, I was walking through the main atrium area and someone yelled, “I LOVE YOU, MOLLY HARPER!” I didn’t see who yelled it, so I just looked at the general crowd and shouted back, “I am very fond of you, too!”
(It’s still a bit shocking that people know who I am.) [/box]

Molly Harper is the author of eight novels, including The Care and Feeding of Stray Vampires and Nice Girls Don’t Bite Their Neighbors. She worked for six years as a reporter and humor columnist for The Paducah Sun, covering courts, school board meetings, quilt shows, and once, the arrest of a Florida man who faked his suicide by shark attack and spent the next few months tossing pies at a local pizzeria. Molly lives in western Kentucky with her family. 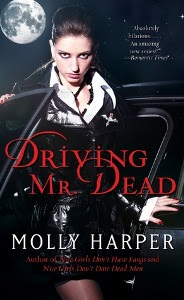 A standalone novella introducing a new side of Half Moon Hollow—featuring a freewheeling courier and the stuffy vampire she has to transport.


Miranda Puckett has failed at every job she’s ever had. Her mother just wants her to come home, join the family law firm, and settle down with Jason, the perfect lawyer boyfriend. But when Jason turns out to be a lying cheater, Miranda seizes on a job that gets her out of town: long-distance vampire transportation. Her first assignment is to drive vampire Collin Sutherland from Washington to sleepy Half Moon Hollow without incident—no small feat for a woman whom trouble seems to follow like a faithful hound dog! And she has to do it without letting her passenger—the most persnickety, stuffy, devastatingly handsome vamp she’s ever met—drive her crazy. As she and Collin find disaster on the roads, they also find an undeniable spark between them. Could Miranda have found the perfect job and the perfect guy for her?[/tab] [tab] 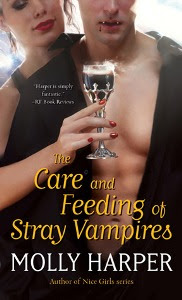 Iris Scanlon, Half-Moon Hollow’s only daytime vampire concierge, knows more about the undead than she’d like. Running all their daylight errands—from letting in the plumber to picking up some chilled O neg—gives her a look at the not-so-glamorous side of vampire life. Her rules are strict; relationships with vamps are strictly business, not friendship—and certainly not anything else. But then she finds her newest client, Cal, poisoned on his kitchen floor, and only Iris can help.


Cal – who would be devastatingly sexy, if Iris allowed herself to think that way – offers Iris a hefty fee for hiding him at her place until he figures out who wants him permanently dead. Even though he’s imperious, unfriendly and doesn’t seem to understand the difference between “employee” and “servant,” Iris agrees, and finds herself breaking more and more of her own rules to help him – particularly those concerning nudity.


Turns out what her quiet little life needed was some intrigue & romance—in the form of her very own stray vampire.[/tab] [tab] 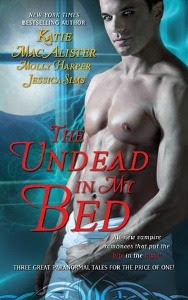 
In “Shades of Gray” by Katie MacAlister, Noelle is a Guardian: a demon-wrangler, imp-banisher, and all-round secret protector of humans from the Otherworld. While working on the set of a ghost-busting reality show in a haunted castle, she meets a sexy vampire, and together they prevent a Master Demon from killing everyone in the castle.


In “Undead Sublet” by Molly Harper, executive chef Tess Maitland is banned from her five-star kitchen in Chicago to recover from “exhaustion.” Choosing a random rental house in Half-Moon Hollow to spend time in, she’s unaware that the house comes with a strange man. Even though Sam Masden’s ex-wife has rented the house out from under him, the divorce settlement allows him access to it for another ninety days. With Tess unable to go anywhere else, and Sam unwilling, a war of epic proportions is declared—and romantic sparks and heavy pots fly.


Jessica Sims’s “Out With a Fang” features Ruby Sommers, a lonely were-jaguar who signs up for a blind date through the paranormal dating agency Midnight Liaisons. When she arrives, she finds out that her date, a vampire, was the human she’d been in love with four years ago but was forced to dump.[/tab]
[tab] 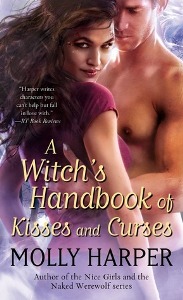 Nola Leary would have been content to stay in Kilcairy, Ireland, healing villagers at her family’s clinic with a mix of magic and modern medicine. But a series of ill-timed omens and a deathbed promise to her grandmother have sent her on a quest to Half-Moon Hollow, Kentucky, to secure her family’s magical potency for the next generation. Her supernatural task? To unearth four artifacts hidden by her grandfather before a rival magical family beats her to it.


Complication One: Her grandfather was Mr. Wainwright and the artifacts are lost somewhere in what is now Jane Jameson’s book shop. Complication Two: her new neighbor, Jed Trudeau, who keeps turning up half naked at the strangest times, a distraction Nola doesn’t need. And teaming up with a real-life Adonis is as dangerous as it sounds, especially when he’s got the face of an angel and the abs of a washboard—can Nola complete her mission before falling completely under his spell?[/tab] [/tabcontent] [/tabs]