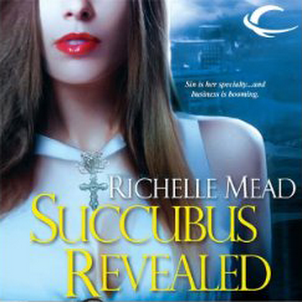 Georgina Kincaid has had an eternity to figure out the opposite sex, but sometimes they still surprise her. Take Seth Mortensen. The man has risked his soul to become Georgina's boyfriend. Still, with Lucifer for a boss, Georgina can't just hang up her killer heels and settle down to domestic bliss. In fact, she's being forced to transfer operations...to Las Vegas.

The City of Sin is a dream gig for a succubus, but Georgina's allies are suspicious. Why are the powers-that-be so eager to get her away from Seattle - and from Seth? Georgina is one of Hell's most valuable assets, but if there's any way out of the succubus business she plans to take it - no matter how much roadkill she leaves behind. She just hopes the casualties won't include the one man she's risking everything for....

I’ve been postponing reading the final novel in this series because I just couldn’t bring myself to say goodbye to Georgina Kincaid. The ride has been fantastic, nearly every installment is a 5 star read however, like all good things it had to end sometime. But, boy what a way to go! Succubus Revealed sure wrapped things up with a bang! I never really picked up on the overall plot line of this series; Seth and Georgie’s on-again-off-again relationship has always been at the forefront but the significance of it never really hit me until this book. Their HEA not only exceeded my expectations but actually left me in awe. Well played Richelle Mead. Well played.

The opening chapters of this book start out like all of those that came before it. Georgina is given a new assignment from Hell which in this case means she’s being shipped to Vegas; yet another obstacle in her relationship with Seth. I didn’t really think much of it nor did Kincaid because it was pretty much status-quo that is, up until things just seemed a little too perfect. Roman, being the shit disturber that he is, encourages his roomie to look into her succubus contract. Again. This leads them to search for answers in the most unlikely of places: Seth. What they uncover shatters both of their worlds beyond repair. The time for playing ostrich is over; now that the truth is out, it can not be ignored.

I thought that Mead did a great job of gathering all of her characters together for one last hurrah. Aside from the bowling tournament which seemed a little ridiculous in my opinion (demons duking it out with strikes and spares, seriously?), I was happy to get some face time with each of them one last time. That’s the thing about this series, as much as I LOVE Georgie, I adore her friends almost just as much. Well, except Jerome. I enjoyed seeing Roman and Carter’s roles in Kincaid’s life come to fruition as well. Many other reviewers complained about the predictability of this book and I’m not sure if I just read the installments too far apart or if I was just too blind to see what was right in front of my nose but the big reveal caught me completely by surprise.

The main plot of Succubus Revealed is pretty straightforward so I won’t delve into it any further for fear of revealing too much. This series really is worth experiencing from beginning to end so I don’t want to ruin it for anyone. The audio versions are all the more satisfying thanks to Elisabeth Rodgers’ brilliant narration skills. Having listened to every one of these books I now find it hard to picture any other voice other than hers as Georgina Kincaid. Her performance as my favourite succubus is incredibly memorable and spellbinding.

Succubus Revealed is highly emotional, jaw-droopingly shocking and just plain fab. If you’re searching for a new series, you should make this one a priority.