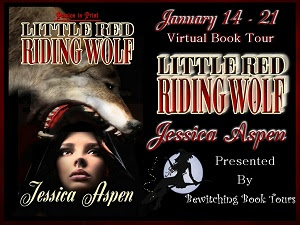 Thanks for having me as your guest today, Carmel. As you might be able to tell from my title, I’m fascinated with wolves too, especially werewolves. Which is why, when I considered which fairy tale to twist, I couldn’t back away from twisting Little Red Riding Wolf. The idea of Red as a wolf intrigued me, and of course it meant I got to create an entire town of werewolves. Such fun!

The original fairytale puts all the power into the hands (paws) of the men. Granny is devoured and Red is saved by the huntsman, but I like strong heroines, so Little Red Riding Wolf became a story of a young woman on the cusp of change. And what is the catalyst of that change? Sexy human ranger Evan Brewster. That’s right, instead of a huntsman coming in at the last minute and saving the day, Evan is the love interest. And boy does it get hot between he and Red. Evan doesn’t know Red is a werewolf and she doesn’t plan on telling him, just playing with him. Wolves are so naughty.

But don’t think that I left out an antagonist. Nope, that falls to Red’s brother Seth. Seth really hates Evan and he believes his sister Red is endangering the entire pack by seducing the ranger. Take one pissed off alpha werewolf, add in a human violating his territory and his sister, and you have a wolf ready to kill.

Seth’s the bad boy of this book, but my editor insisted he deserved some payback so in the next book, Snow and the Seventh Wolf, Seth is the tortured alpha hero, instead of the villain. What goes around comes around, even if it’s trouble in love. But for now you can read about him wrecking havoc in Red’s love life. Somebody’s got to be the bad guy, or the Big Bad Wolf.

What do you love about wolves or werewolves? How about fairy tales? Have you ever read an adult fairy tale? What did you like about it? Leave a comment and let me know, I’ll be checking in and look forward to discussing wolves, sexy forest rangers, and the Big Bad.


[author] [author_image timthumb=’off’]https://lh3.googleusercontent.com/-qJN8SCKreTg/UOnxgsHDT4I/AAAAAAAAF6g/Evn75MmT6ts/s314/Jessica+Aspen.png[/author_image] [author_info]Jessica Aspen writes paranormal romance near the foothills of the Colorado Rockies. Her books are full of elves, were-wolves and sexy men who walk on the dark side of the knife. She loves dark chocolate, walking the dog, hiking and is obsessed with new electronic writing devices. Jessica is also obsessed with writing, and learning about writing. She is a member of RWA, CRW, FF&P and PRO.

She rolled his name through her mind, resisted the desire to taste the flavor of it on her tongue. Maybe if she wasn’t touching him she could do this…carry on a normal conversation. She struggled for something to say, something that would cover this incredible desire to fuck a complete stranger.

“Welcome to Radon,” she managed to get out. “How do you like it so far?” Inane. Moronic. But it was out now. She hoped he couldn’t see the shaking that had started at his touch, or smell the moisture between her legs. Lucky he was only human.

Calm down, Red! You can do this. You have to do this.

She knew what that appraising look meant. She’d received it from all the available males her parents had invited to their house in an effort to entice her to settle down. But that look from the bachelor wolves had never made her feel like this. Feel like her whole body was tuned in to his. Like she should get on all fours and push her ass in the air, spread her legs, and beg.

Her palms were damp. She caught him checking her out and was glad her hoodie was zipped up tight and covered her chest. Her nipples had tightened so fast, so hard, they almost hurt.

“Town’s been a little tough on you, huh?” she asked. Poor guy, he couldn’t have known what coming to this area would be like. They hadn’t had a ranger in the area who wasn’t pack in her lifetime. The county was up in arms.

“You could say that.” He shot her a conspiratorial smile that warmed his eyes to molten chocolate. She had a sudden vivid picture of a sheepskin rug and him lying naked in front of a fire, her lips and tongue tracing the contoured lines of muscles illuminated by the flames.

She dragged her mind back and forced it to focus on the present. Focus on the words coming out from between his sexy lips.

“You’re the friendliest person I’ve run into in this town. Where have you been hiding?”

Wrong question ranger. The question was who had been hiding him from her? Now her mother keeping her home from work to make jam had begun to make sense. Maybe her mother would never think she was an adult. Although maybe her mother was right, given her lusty thoughts, maybe she should be sequestered.

“I normally work at the general store in town. I must have just missed you.” Yeah right. Did that sound as lame to him as it had to her? She lifted her chin. Her mother had been making up excuses to keep her at the family’s house all week. Despite being sent off to the boonies she had met the hot new guy in town.

Her mother’s plan had backfired.

“Is that Burdock’s? It’s the only general store I’ve seen.” One long hand reached up, pushed his thatch of hair back off his face in an unconscious slow sensual movement. The hair fell forward back into place as soon as he released it, dark and thick.

“Yeah, I guess you’ve been in there.”

“Yeah. Is the black haired dude with the bad-ass attitude who mans the counter related?” His eyes crinkled up at the corners when he smiled. An urge to spread her thighs slid through her. In an effort to control it, she clenched them tight.

What had he asked?

“Seth,” she said, relieved she knew what to say. “He’s one of my brothers. He’s none too happy that you’re here.”

“You know, you’re the first woman I’ve met under thirty all week. I was beginning to wonder where they all were.”

Dangerous territory here. She’d better be careful of what she said. Obviously the alphas had the few available females under lock and key.

“We have a surplus of men in this town. You probably just missed the women.” She shouldn’t be talking to him. He made her so nervous, she just knew she would slip and let something out. Something that would alert him that all was not as it seemed in small town Radon, Colorado.


“Well it’s been nice chatting, but I have to get going.”

She smiled and started to move off down the path again, but he stepped in front of her, blocked her.

The back of her neck prickled.

She supposed he was eager to talk to the only friendly face in town, but she wished he would back off. She was having enough trouble controlling herself as it was. Her heightened senses told her to take action. Now.

He’d moved too close. His spicy male scent filled her nostrils, caressed her skin. Made her want to bury her face in the crook of his neck and inhale, suck him in like oxygen before going underwater.

“My grandmother lives up the mountain. I’m just going to check on her and stay a while.”

His face lost its easy smile, grew concerned. “You’re hiking up the mountain by yourself? A woman like you shouldn’t be out here alone.” She bristled at his statement. Just like her brother! What was it with men and their bossy attitudes?

“A woman like me? Slow down buster! I’ve been hiking this mountain since I could walk. You’re out here alone, why not me?”

“But I’m a trained outdoorsman. You hardly look prepared in those shorts if the weather changes. What do you have in that pack?” He moved closer to her, and she backed up, suppressing the desire to bare her teeth. With relief she channeled her newfound sexuality into anger instead. This she understood.

Human or not, he was beginning to get her back up, just like any other male.

“I’ll be at Grandma’s before dark. And it’s an incredible day. No storm in sight. See ya.” She edged around him and moved back onto the path, determined to put him and temptation, behind her.

“Wait, I’ll go with you. There are signs of hunters in the area, you shouldn’t be hiking alone.” He picked up his oversize pack with ease. Then scrambled, trying to buckle the waist straps and keep up with her at the same time. She stepped up the pace.

She could feel him close behind, knew he was eye level with her ass. Knew he watched her backside swish with each step.

Her tingling nerves began to send messages again. With him nipping at her ankles, she felt like prey.

“No, thanks. You won’t be able to keep up.” She moved faster, pumped her legs in a rapid rhythm on the familiar trail.

His legs might be longer than hers, but she had Were stamina and a light pack. No way he could keep up with her for long.

“Hey, I’ve been through hell in the military. If I could keep up in basic, then I can keep up with you little girl.”

She laughed, flashed a catch-ya-later look over her shoulder, and put on a hair more speed. He’d find out soon enough that she might be little, but she had more oomph in this little package than most. And he could just watch her swish her tail until she was out of sight.

Leave a comment with your e-mail address answering one of Jessica’s questions to be entered to win an eBook copy of Little Red Riding Wolf by Jessica Aspen! Tired with being the runt of the litter, feisty Red jumps on the opportunity to take on the sexy new forest ranger, but when Evan uncovers evidence of wolves, things get out of control. Can Red keep her were-wolf identity secret and still save Evan from her brother’s thirst for blood?

Fraternizing with humans is taboo, but when feisty werewolf Red runs into hunky new forest ranger Evan Brewster, she jumps on the opportunity to let loose her desires. Evan is stoked when he meets the petite red haired hottie, and combined with his new discovery of wolves in Colorado, thinks his career and life are made. Then Red pushes him away, her hostile brother threatens his life, and things begin to spiral out of control. Caught between her sexy lover and her pack can Red trust Evan with her secrets, or must she sacrifice her human lover and her heart?