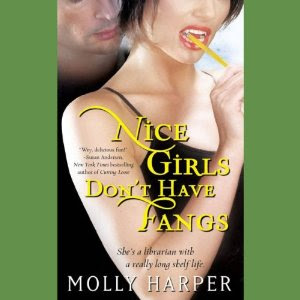 Maybe it was the Shenanigans gift certificate that put her over the edge. When children's librarian and self-professed nice girl Jane Jameson is fired by her beastly boss and handed $25 in potato skins instead of a severance check, she goes on a bender that's sure to become Half Moon Hollow legend. On her way home, she's mistaken for a deer, shot, and left for dead. And thanks to the mysterious stranger she met while chugging neon-colored cocktails, she wakes up with a decidedly unladylike thirst for blood.

Jane is now the latest recipient of a gift basket from the Newly Undead Welcoming Committee, and her life-after-lifestyle is taking some getting used to. Her recently deceased favorite aunt is now her ghostly roommate. She has to fake breathing and endure daytime hours to avoid coming out of the coffin to her family. She's forced to forgo her favorite down-home Southern cooking for bags of O negative. Her relationship with her sexy, mercurial vampire sire keeps running hot and cold. And if all that wasn't enough, it looks like someone in Half Moon Hollow is trying to frame her for a series of vampire murders. What's a nice undead girl to do?

Molly Harper has become my go-to author whenever I’m in the mood for a happy-go-lucky story with quirky characters and Amanda Ronconi has the perfect sarcastic tone that helps add some extra oomph to an already hilarious tale. This book is a great way to break a reading slump or to lighten your mood. I think Murphy’s Law: “anything that can go wrong will go wrong”, was written with Jane Jameson in mind. Each chapter begins with a cute quote from The Guide For The Newly Undead; Harper also did something similar in her The Naked Werewolf series and I’m happy to see that it wasn’t just a one-off because these tips are hilarious! Nice Girls Don’t Have Fangs will make you laugh so hard that you’ll end up in tears (in a good way!).

I discovered Molly’s books backwards; after having enjoyed her werewolves so much I just had to check out her vampires too! Please keep in mind that I am left-handed though so I tend to do things a little out of whack compared to most. Jane and I hit it off instantly! How can you not want to learn more about a character who gets fired from her job, drunk, mistaken for a deer and then shot within the first few chapters? You can’t. Jameson is ditzy, sarcastic and lovable. She’d probably drive me crazy in real life but as a fictional character, she’s freaking hilarious! Her shenanigans are laugh-out-loud funny and the situations she finds herself in are baffling in their absurdity. More often than not I found myself thinking “this could only happen to Jane”.

There’s a decent amount of world building in this novel which is expected seeing how it is the first installment of this series. I enjoyed learning about Harper’s vampires, the undead council and especially Jane through her internal monologues. The main story struck me as kinda odd; at first I wasn’t really sure of its direction and then as the pieces came together I was quite stunned by the overall turn of events. They were… unexpected. I’ll be curious to see what the next installment has in store because I had trouble identifying a plot line that’d continue into the next book. I’m thinking that these novels might be episodes in the mini-series that is Jane’s life which is fine by me because Jameson’s world definitely isn’t dull!

The side characters are just as lovable as the main one; I especially liked Gabriel and Zeb. The former is undeniably sexy but begins this story with a stick up his butt. At first I found him stuffy, a little stuck-up and rather mundane but, as the book progresses Jane slowly chips away at his snooty outer shell. I enjoyed watching his transformation and by the end I was putty in his hands. Zeb’s a normal guy who suddenly finds himself with a werewolf girlfriend and a vampire for a best friend. At one point, he repeatedly stabs Jane just to watch her heal. Their experiments with her undead-ness are beyond funny!

Nice Girls Don’t Have Fangs is good, clean, fun and guaranteed to make you look like an idiot because you will laugh out loud and receive dirty looks from those around you.