Jennifer Estep just revealed the cover of the 8th book in her Elemental Assassin series earlier today on her blog. I just recently started listening to this series on audio as part of The Book Vixen’s Read-A-Long and I’m already hook-line-and-sinker addicted! If you haven’t given these novels a try yet I strongly encourage you to do so; I’ll be posting my review of Spider’s Bite later this week so stay tuned! In the meantime, enjoy the pretties! 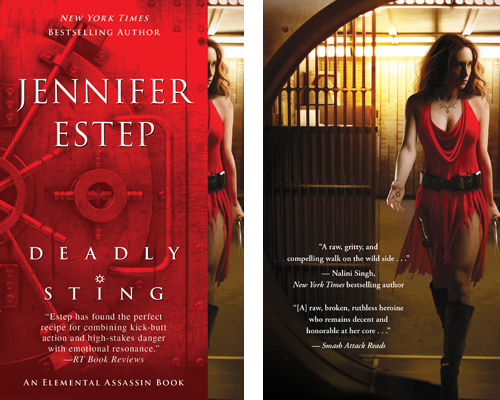 Red is definitely my color. Good thing, because in my line of work, I end up wearing it a lot.

Most people shy away from blood, but for an assassin like me — Gin Blanco, aka the Spider — it’s just part of the job. Still, it would be nice to get a night off, especially when I’m attending the biggest gala event of the summer at Briartop, Ashland’s fanciest art museum. But it’s just not meant to be. For this exhibition of my late nemesis’ priceless possessions is not only the place to be seen, but the place to be robbed and taken hostage at gunpoint as well. No sooner did I get my champagne than a bunch of the unluckiest thieves ever burst into the museum and started looting the place.

Unlucky why? Because I brought along a couple of knives in addition to my killer dress. Add these to my Ice and Stone magic, and nothing makes me happier than showing the bad guys why red really is my color.

What do you think? I for one LOVE it! The red dress is killer! I can’t wait to get caught up on this series because the blurb for this book sounds amazing!