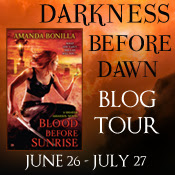 Today I’m pleased to welcome fab author, Amanda Bonilla, to the blog! She recently published the second book in her Shaede Assasin series titled Blood Before Sunrise. If you haven’t given her novels a try yet I strongly encourage you to do so. You’re in for a real treat, trust me! 🙂

Thanks so much to Carmel and Rabid Reads for hosting me today!! Go Canada! 😉

Sometimes I wonder if I have bad luck because I’m superstitious, or if I’m superstitious because I have bad luck. I come from a pretty superstitious family. In fact, my great-grandma, who was admittedly a little off her nut, claimed she saw ghosts, ladles floating above water basins, and she even claimed a will-o-the-wisp drifted through her house one night. So I suppose certain superstitions were passed down through my family. And my mom likes to tell me that Murphy’s Law was written for me. Over the years I’ve adopted a “plan for the worst” mindset because truly, my mom is right. Call it superstition, self-fulfilling prophecy, or just plain old bad luck, but I seem to experience the effects of Murphy’s Law more often on Friday the 13th.

The last Friday the 13th was in April. I backed my car into my husband’s truck and broke my tail light and dented the back end. I’ve broken a wrist and locked my keys out of my car on Friday the 13th, too. My list of misfortune could probably fill an entire blog post on their own, but instead of boring you with a story about the time the hubs dropped a thirty pound river rock on my foot, I thought I’d share a few fun facts I gathered from around the interwebs about Friday the 13th.

Fun Facts for Friday the 13th

Thanks to msnbc.com and cosmicsociety.com for some of these fun facts! How do you feel about Friday the 13th? Is it just another day, or do you hole up in your house and hide under the covers until the 14th rolls around?

Review: Against the Dawn by Amanda Bonil