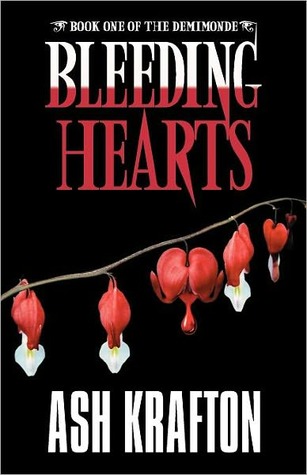 Sophie Galen is an advice columnist who is saving the world - one damned person at a time. Shy and sensitive Sophie has all but given up on love until she meets Marek, a mysterious stranger who seduces her with his striking good looks and his take-charge attitude. Yet the darkness she senses within him may be more than she is prepared to handle when Marek draws her into a world of vampires, werewolves, and treachery. Forced to leave behind the comfortable routines and certainties of her past, Sophie makes unbearable sacrifices and uncovers hidden truths about herself and the world around her.

Ash Krafton starts this story off with the classic boy meets girl plot line. Then, as usual, the vampires show up and the shit hits the proverbial fan. And then finally, throw in a few unique vamp variations and Bleeding Hearts morphs into a riveting read. I particularly enjoyed the links to Egyptian mythology and the way that Sophie’s hidden purpose is gradually unveiled. Unfortunately, Krafton also worked in one of my biggest fiction pet peeves: insta-love. It wasn’t overpowering nor did it steal the show but that still doesn’t detract from the fact it was there and as a result, mild annoyance ensued on my part.

The opening chapters of this book really drew me in. I enjoyed the way that Ash introduces the reader to her main character, Sophie. We get to tag along with miss Galen through her daily activities which gives us a real sense of her personality. Way more effective than a boring information dump in my opinion! I also liked Sophie and Marek’s first meeting. It came off as so innocent and first-date-like that it was cute. However, things are obviously not how they seem and the new love struck feeling is fleeting at best. Once the supernatural curtain is lifted from Galen’s eyes, life takes on a whole new meaning.

At first, I enjoyed the chemistry between Marek and Sophie. They go on a couple of dates and life is grand. That is until Galen learns the “hard way” about the existence of vampires. At first, she’s obviously shocked and a little horrified but she comes to grips with the news surprisingly quickly. Not only that, but the fact that she’s dating a vampire doesn’t seem to even phase her. What’s even odder is how this news seems to jump start the beginnings of that pesky insta-love phenomena that I dislike so much. Granted, there’s a lot going on in Sophie’s life after the big reveal and she’s dealing with a hidden purpose to boot but the whole thing was just too much, too soon, too fast for my liking. I’m assuming that Krafton simply wanted to get the relationship details out of the way quickly so that she could focus on the meat of the story. Not a bad idea but it could have been handled better in my opinion.

I liked the Demivampire concept and the idea that there are different phases to vampirism, each with their own pros and cons. The Egyptian mythology elements also added an extra level of depth to Ash’s undead that made for an interesting tale. The story is packed with fantastic dark and light imagery that really plays up the ancient war of good vs evil. A priest is even tossed into the mix! I can’t help but admire Krafton’s courage on that one. Jared is actually a very lovable character and I was saddened by his cruel fate. Who would have thought!? Sophie’s hidden purpose also came as a welcome surprise. It was a neat way of forming a permanent link between her and the paranormal world. Whether Marek is in the picture or not, she’s stuck in this world for the long haul due to her heritage. Poor girl!

A dark urban fantasy story with witty dialogues and compelling mythology, Bleeding Hearts is an satisfying read that’s easy to like. Plenty of loose ends are left dangling which makes the sequel sound all the more promising!

[author] [author_image timthumb=’on’]https://d202m5krfqbpi5.cloudfront.net/authors/1335180209p5/4444277.jpg[/author_image] [author_info]Ash Krafton’s work has appeared in several journals, including the Absent Willow Review, Abandoned Towers, and Silver Blade. Ms. Krafton resides in the heart of the Pennsylvania coal region and is an active member of Pennwriters, a national writers group. She lurks near the Spec Fic Chick website and is looking forward to the release of her first novel, Bleeding Hearts.

Thanks to the lovely Ash Krafton, there’s one eCopy of Bleeding Hearts up for grabs as well as a chance to name one of book #3’s (Wolf’s Bane) werewolf characters!

This giveaway is international and closes on April 20th at 11:59 PM EST. To enter: leave a blog post comment with your e-mail address and a suggestion for a character name.

There’s also a tour-wide prize pack giveaway happening on Ash’s Blog that you should check out soon because it closes in a couple of days!