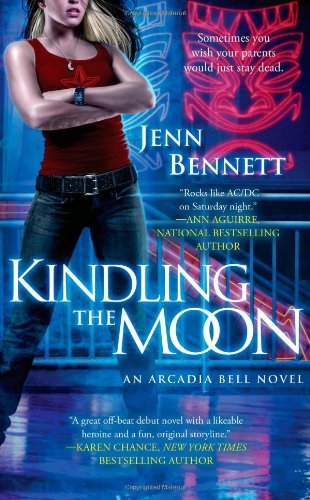 Being the spawn of two infamous occultists (and alleged murderers) isn’t easy, but freewheeling magician Arcadia “Cady” Bell knows how to make the best of a crummy situation. After hiding out for seven years, she’s carved an incognito niche for herself slinging drinks at the demon-friendly Tambuku Tiki Lounge.

But she receives an ultimatum when unexpected surveillance footage of her notorious parents surfaces: either prove their innocence or surrender herself. Unfortunately, the only witness to the crimes was an elusive Æthyric demon, and Cady has no idea how to find it. She teams up with Lon Butler, an enigmatic demonologist with a special talent for sexual spells and an arcane library of priceless stolen grimoires. Their research soon escalates into a storm of conflict involving missing police evidence, the decadent Hellfire Club, a ruthless bounty hunter, and a powerful occult society that operates way outside the law. If Cady can’t clear her family name soon, she’ll be forced to sacrifice her own life . . . and no amount of running will save her this time.

I won a copy of this book in a blog giveaway so it wasn’t originally on my wishlist but I’m glad that it ended up in my TBR pile. At first the story reminded me of Linda Wisdom’s Demons series but not for long. Kindling the Moon branches out and does its own thing which results in a plot line that doesn’t quit, charismatic characters and an out of left field ending. And Jenn Bennett is just getting warmed up! The first installment of a series is always tricky business but Kindling the Moon is no shrinking violet; this book leaves sweltering squelch marks on the Urban Fantasy scene and makes the next novel an automatic must read.

I’m calling it! Arcadia Bell is my new BFF. I immediately connected with her character and pictured how much fun it would be to hang out with her on girl’s night. Her life is such a mess and getting more disastrous by the second but her “glass half full” attitude keeps her going. Cady’s sense of humor and can-do mentality save her on multiple occasions from her seemingly dire circumstances. She also lightens up Lon’s darker, more pessimistic personality. It’s apparent early on that the demonologist is something “other”. I thought that Bennett did a great job of conveying that tidbit. Butler’s definitely smexy but his thought process and mannerisms are off which only adds to his charm. Cady and Lon are both black sheep in their respective lives and I enjoyed watching their relationship grow. There’s some booty action so don’t worry, you’ll get your naughty fix with this book.

Jupe was an unexpected character and I was surprised by how much he added to the story. He’s just a kid so let’s be honest, I don’t read UF to get a dose of the younger generation’s point of view. However, in this case I found that he helped bridge the gap between the two love birds and added a third perspective that turned out to be very entertaining.

The story itself is a rush. It’s a battle against time and destiny with one major obstacle in the way: demons. Well, them and insane magicians but I don’t want to get into that. For the most part, the outcome seemed obvious. My expectations were set; I didn’t know exactly how it was all going to end but I had a pretty good idea. That is up until Jenn went and pulled the rug out from under my feet and does the unexpected. I did NOT see that one coming. Poor Cady! The twist at the end is brilliant!

For a book that didn’t even make it on my wishlist the first time around; I’m shocked and amazed by how much I enjoyed it! Kindling the Moon is deliciously mischievous in a wolf in sheep’s clothing kind of way. Summoning the Night will be an automatic buy in April 2012 for me.

6 responses to “Review: Kindling the Moon by Jenn Bennett”