I have to give props to E.J. and to her Spirit Guide series. This is the third time that she’s delivered a high quality, straightforward and entertaining read. Her success is no fluke! The momentum of this story is still holding strong and there’s no sign of it wavering anytime in the near future especially with two other installments already in the works. As reluctant as I was at first to read a book titled She Smells The Dead; now I find myself eagerly anticipating Yuki’s next adventure. I guess that just goes to show that you shouldn’t judge a book by its cover… err… I mean title.

I probably mentioned this point in my earlier reviews of this series but it’s worth reiterating. I adore E.J.’s no nonsense, straight-to-the-point writing style. Her direct approach ensures that there’s zero confusion. Readers always know what’s what and Stevens doesn’t waste our time with useless details in an attempt to camouflage holes in the plot line. There are no gaps in the Spirit Guide series. I’ve never once felt lost or had to flip back to previous chapters to figure out what the heck is going on and for that I’m grateful. There’s nothing I hate more than having to construct a flow chart while reading a book in order to be able to keep up with the convoluted story line. Keep it simple; that’s my motto. I also like the fact that her novels are relatively short. Like most of you, my TBR pile is massive so I’m elated whenever I can burn through a story in mere hours. I never skim parts of E.J.’s books because there’s no need. Every page is essential to the development of the plot line.

Forget about Yuki and Cal; I want to know what’s up with Emma and Simon! The path of the main power couple is obvious. There’s no real conflict between these love birds but the same can’t be said of their sidekicks. There’s a definite storm brewing between these two and I for one can’t wait to see lighting! Did Emma almost say the L word or did I just imagine that part? It slipped out so quickly and was covered up even faster that it’s hard to say for sure. E.J. gives us absolutely nothing in that area for the rest of this tale until a small glimpse at the end. Talk about MEAN! After all of the nice reviews I’ve written for this series. Hmph! I kid of course about that last bit but that’s not to say that I’m any less frustrated with her blatant teasing!

The sense of urgency wasn’t as prevalent in Legend of Witchtrot Road as its predecessors. The pace was still blisteringly fast but I just didn’t feel like everything was on the line this time around. That’s not a criticism. Obviously Yuki’s world can’t be threatening to end in every book, that would just be ridiculous! This story was more about her accepting her new found powers and using them to do good. The whole novel felt like a “smell mission”. Cal’s also adjusting to his new role as alpha nicely. He’s a strong character with a lot of responsibility but he handles it all in stride. How very grown-up of him!

The ending wasn’t what I expected. There was nothing really supernatural about it at all. Which struck me as a bit odd and somewhat disappointing. Wading through all of the mystery surrounding the Legend of Witchtrot Road only to discover that the answer is simple and 100% human. Also, other than the bit of intrigue surrounding Simon and Emma’s possible relationship progression, the resolution didn’t leave much of a segue to Brush With Death. But, who am I to question E.J. Stevens methods? She hasn’t lead me astray yet so I’m just going to have to trust her and go with it. A great addition to the Spirit Guide series. Here’s hoping for many more!

This Giveaway is now CLOSED. — Winner — 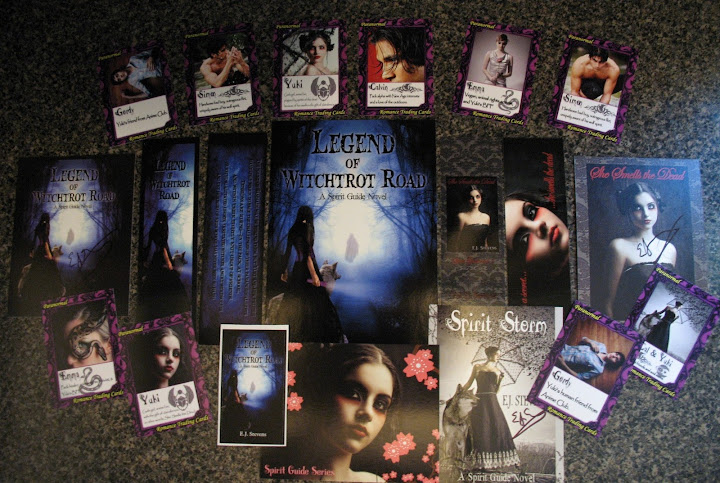 To enter: leave a comment with your e-mail address and answer the following question: What’s your favorite Halloween legend? Contest ends on October 22nd at 11:59 PM EST.