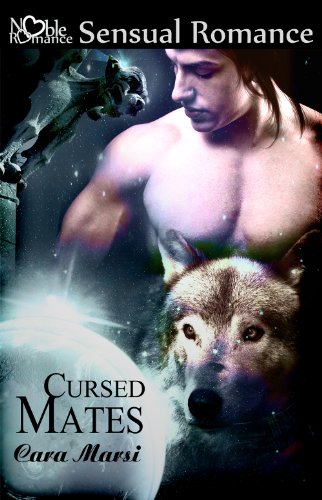 Cursed Mates has everything that I look for in a werewolf book; a kick-ass female lead, a sexy were and a cool story. Not only does this novel have great action in and out of the bedroom but it also paints a bigger picture. One about destiny, true love and faith. However, in the end I was left with mixed feelings. There were a few elements that for me, really took away from the book. They weren’t in my opinion necessary to the storyline and if they’d been missing I would have enjoyed reading this novel a lot more.

The plot is original and I was pleased with its scope and depth. The author skillfully explores the past and adeptly ties the protagonists histories to the present. Everything that readers need to know in order to fully appreciate the story is covered in a way that’s not only informative but also captivating. All of the main characters have colorful pasts and reasons for why they’re living the lives that they are. The characters are well developed and you’ll never feel lost. The pace fits the storyline well and all of the puzzle pieces show up and fit together in a natural order.

Nick Radford is definitely drool worthy. He’s got the looks, the confidence and the whole knight in shining armor persona going for him. His past is a sad one and as a result he’s just trying to do the best that he can to do some good in the world. Radford fully expects his immortal life to end in flames but, he plans to take the demon who’s responsible for his lot in life with him as his final act. There’s also plenty of hot and heavy action between Nick and Kyla. So not only is he a great man but he’s also a great lover! Yes, I may have a tiny crush on Radford.

Aside from the great plot and yummy hero there are a few less than desirable elements in this book. I felt the story had a sort of native american side to it that didn’t fit into the action very well. In the midst’s of danger, Kyla would light candles, take a bath and consult her “spirit guide”. Like most visions, they’re cryptic and not very helpful. I just found it ridiculous that in the middle of a fate-of-the-world battle the heroine’s big move is to soak in bubbles. Secondly, there’s a lot of drama between Nick and Kyla. Which is not unusual in paranormal romance, but in this case I found it tiresome. They’d argue over the same issues over and over again. There was little to no growth on the romantic end of things. The relationship between the two main characters just went in an endless loop. Kyla and Radford felt like a Hollywood couple in that they’re on-again/off-again through the whole book until the ending.

That being said, I did enjoy this book and think that it’s a worthwhile read for fans of the genre. If spiritual visions are your thing then you’ll definitely find something in this story for you. However, I found that this element took away from the tale and because of it I didn’t enjoy this novel as much as I could have. Just when things were getting juicy the spirit guide would show up to throw some water on the fire. A good read overall but it had the potential to be great.