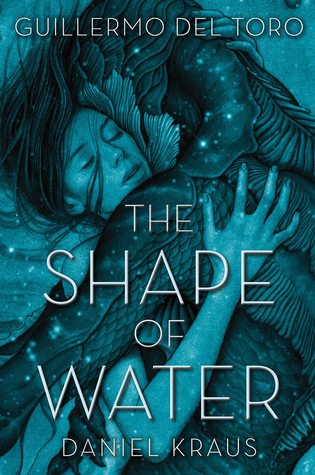 THE SHAPE OF WATER is set in Cold War-era Baltimore at the Occam Aerospace Research Center, which has recently received its most sensitive asset ever: an amphibious man captured in the Amazon. What unfolds is a stirring romance between the asset and one of the janitors on staff, a mute woman who uses sign language to communicate with the creature.

Developed from the ground up as a bold two-tiered release—one story interpreted by two artists in the independent mediums of literature and film -- The Shape of Water weaves together fantasy, horror, and romance to create a tale that is equally gripping on the page and on the big screen.

Prepare for an experience unlike anything you've ever read or seen.

THE SHAPE OF WATER is a strange book. For a variety of reasons.

1. Dual film/book release, which, to my knowledge, has never been done before.

That’s an average of 2.4 pages per chapter.

In the past, I’ve knocked an entire star off my overall rating of a book if a mere portion of it felt choppy and chaotic b/c short chapters. And before TSoW, I considered a ten page chapter to be short.

3. All those tiny, tiny “chapters” are told from multiple POVs, which I almost always hate outside of 500+ page fantasy novels, preferably in a long-running series.

Somehow del Toro and Kraus pack so much personality, so much meaningful information, so much feeling into those tiny, tiny chapters that the only reason I noticed their length is b/c when I buddy read a book, I usually comment in the group thread every five chapters.

Getting through five chapters went a lot quicker than it usually does.

As for the alternate POVs (six of them), it doesn’t work outside of epic fantasy, b/c you don’t have enough time to connect with your storytellers, but that wasn’t a problem here. The short, powerful chapters had an effect usually reserved for significantly longer books—I felt like I knew the characters, and knew them well, almost immediately.

Basically, the military captures a mythical fish-man-creature in South America and transports it to a research facility to poke, prod, and torture it (b/c ‘Merica). Then a woman on said facility’s custodial staff falls in love with the fish-man-creature and tries to rescue it before its dissected for research.

B/c despite the apparent simplicity of the setup, there is nothing simple about this story.

Elisa is an orphan with mysterious scars on her throat, the byproduct of a surgery she has no memory of or explanation for that left her unable to speak. Her loneliness is palpable. Strickland is a career military man clearly suffering from PTSD, yet he is a wholly unsympathetic character, b/c dude is a sadistic bastard. His training only serves to give him the experience and authority to break more shit than a civilian could. Lanie is a housewife whose newly gained independence is yanked away with the return of a husband she’d reconciled herself to losing.

All of this is made more intense by the 1960s setting. The evil man has more power. The orphan, the gay man, the black woman, and the white housewife have fewer options, are thoughtlessly victimized in ways that fifty years later seem incomprehensible.

SO. Not only is TSoW a fantastical story of captured sea gods and thwarting the Man, it’s a complex social commentary—it’s remarkable how much was accomplished in just 312 pages.

That being said, I did have a few minor issues, most of them spoilers, so don’t click the spoiler tag unless your prepared for the consequences:

And YES, I get that fish dude is a Wild Thing, but COME ON. It’s bad enough when a pet dies in a book, so if you have a character EAT another character’s pet, be prepared for the fallout. *shakes fist* « Hide Spoiler

2. Worst sex scene I’ve ever read. It’s so bad that when I texted book bff about it, she not only immediately recognized my quote referencing it, she responded WITH THE NEXT LINE: 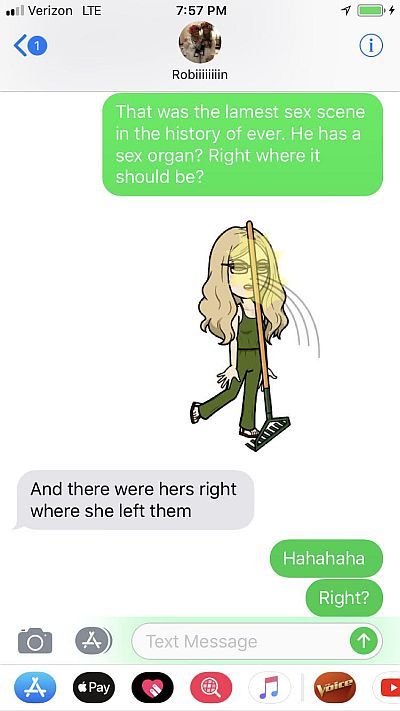 If you think we’re exaggerating or oversimplifying or summarizing, you’re WRONG: 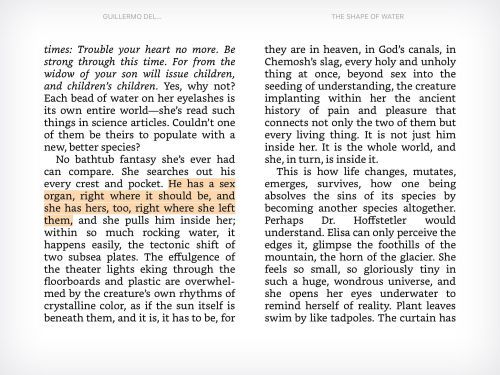 3. In the words of book bff: those fingers will haunt me forever.

You: What fingers? O.o

Me: Someone loses a couple of fingers in an altercation with fish-man-creature. They get reattached, but b/c reasons, we know there’s s possibility they won’t take.

Me: You have no idea.

BUT. A couple of lost digits, etc. are hardly reasons big enough to stop you from experiencing THE SHAPE OF WATER for yourself. I can honestly say, it’s been a unique experience, and it’s one I highly recommend.

Now I’m going to watch the movie. I’ll let you know how it goes. *winks*

3 responses to “Review: The Shape of Water by Guillermo del Toro and Daniel Kraus”