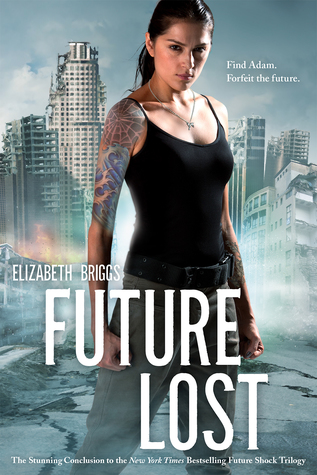 It’s been a year since Elena Martinez and her boyfriend Adam first got involved with Aether Corporation, and they’re trying to move on with their lives. But when Adam goes missing, Elena realizes that he’s done the unthinkable: he went to Aether for help developing his cure for cancer. Adam betrayed her trust and has traveled into the future, but he didn’t come back when he was supposed to. Desperate to find him, Elena decides to risk future shock, and time travels one more time. This future is nothing like they’ve seen before. Someone has weaponized Adam’s cure and created a dangerous pandemic, leading to the destruction of civilization. If Elena can’t find Adam and stop this, everyone is at risk. And someone will do anything to keep her from succeeding.

Third and final(I think) book of this trilogy, Future Lost brought the series to an end with an exciting and edge of your seat at times adventure. But then, I could say the say the same thing about each of these books. Just a heads up, spoilers concerning book one are coming up.

I think I described both of the previous books as fascinating and that certainly is true of this one as well. It’s described as science fiction and young adult, but I would also add older young adult to that as the series progressed. I would also add that it’s a romance. The main characters, Elena and Adam, are still front and center and involved in the evil dealings of the Aether Corporation once again. Never a good thing.

The action all started in the first book, Future Shock, when a talented group of older foster teens(and one young genius)are given the opportunity to make a huge amount of money by the Aether Corporation. Each had to agree to what the company asked them to do without really knowing what’s at stake. They are sent thirty years to the future as a sort of pioneer experiment for research purposes. They are only there for a day, but manage to end up in all sorts of predicaments. And ultimately in life and death situations. Not everyone survived. Yes, the future is very different, but the teens also find out things about their future selves, things one should never know beforehand. There’s something to be said for never knowing your own future. The second book, Future Threat, continued with other trips to the future and lots more scary situations. If I thought that was bad, this third book took the prize and ramped up the story into another realm of possibilities and not a good one in the bunch.

You might notice that I am not telling anything about this third book. That’s because nothing can really be told due to spoilers. Future Lost was surprising and the author took the story in a direction I never saw coming, so it kept the story fresh and new. Pretty great in a third and final book of a series, I must say. All of the books kept me thinking about paradoxes and about what would happen if you were to run into yourself in another time. Or if it was even possible without messing up everything. What would happen if you changed something in the future? Would it change everything else that happens? One thing about this whole series, it makes you think about, what if?

I enjoyed my time with this young couple and all the conundrums they face. All the other side characters and what happens to each of them was also well told, as each character was as fleshed out by the author as the two main characters were. Even the villains. Briggs has written a series that I won’t soon forget. In fact, while getting ready to write this, I started reading it again and had read 42% before I knew it.

A page turner, this series(and book)is one that I highly recommend to older young adults to adult. They must be read in order. There’s violence and some alluding to sexual situations, but all of it is closed door-and after they turn 18. Amazing series!