“Daemons attacked my gate that night too,” Daimon offered in a slow, measured way that made it clear to Esher that he was still debating mentioning the bandage again, pressing him for answers he didn’t want to give.

“How many nights ago?” Valen looked from Daimon to him, his blue eyes bright with curiosity.

“Three.” And Esher had gone over it from every angle. “It just felt like a regular attempt on the gate.”

But now Daimon had mentioned an attack in Hong Kong at the same time.

Keras exhaled a curse, which was never a good sign. “Shit… Paris and London were hit that night too. I went straight from Paris to help Cal in London.”

Marek finally looked up from his laptop. “Seville had a couple of visitors. Nothing I couldn’t handle though. I hardly broke a sweat.”

Everyone looked at Ares. His second-eldest brother was a wall of tensed muscle as he sat on the couch with fire in his eyes, the air around him shimmering like a heat haze as his face darkened.

“Five hit the gate,” he growled, the flames in his irises burning brighter, and then said what was on everyone’s mind, “It was a coordinated attempt. They’re testing us.”

“They must have hit the Tokyo and Hong Kong gates at the same time, to keep us both busy.” Daimon curled his fingers into fists, causing his black leather gloves to creak as frost glittered on them, a sign that Ares wasn’t the only one losing his temper as he considered the implications.

“Paris and London were hit in the early hours of morning. It would have been dark still in Rome, New York and Seville.” Keras leaned forwards and rested his elbows on his knees, his black shirt blending into his equally dark slacks, and his fine jet eyebrows dipped low above emerald eyes that glowed a shade brighter than normal.

Really not a good sign. It wasn’t like their fearless leader to let anything get to him.

A coordinated attack by daemons wasn’t a threat. Daemons were weak. They could handle them.

It certainly wasn’t a threat to Keras.

His brother could have stepped to every gate and dealt with all the daemons at each one in the blink of an eye.

Marek lifted his head again, his warm brown eyes reflecting his concern as he studied their brother. Daimon exchanged a look with Cal, and Cal casually leaned back into the couch, splaying his arms along the top of it, where Keras couldn’t see him, and shrugged, his expression shifting to show he wasn’t sure what was up with Keras.

Valen moved, crossing his legs so his black fatigues stretched tight over his left knee, and slowly dipped his hand into his pocket and eased his phone out of it. Esher frowned as he rifled through the charms dangling from it, his actions slow and careful.

Valen’s thumb stopped on a familiar silver sword and shield, and he pressed it into his palm.

Calling for back up?

Esher had half a mind to tell his younger brother not to meddle, but something was wrong, and the need to take care of his family had him holding his tongue and hoping she would answer.

All of them had noticed that Keras hadn’t been the same since leaving the Underworld.

“You think testing us has something to do with whoever is behind sending the stronger daemons to attack us?” Valen slipped his phone back into his pocket.

Just the mention of their enemy was enough to have the raging tide that Esher had been fighting to hold back for the past few weeks rising again inside him, surging through his veins and flooding his mind with a dark need.

A hunger to hunt.

“Rein it in,” Daimon said softly, a bare whisper that curled around him and pushed back against the tide. “We are all safe. Everything is good here. Remember?”

But everything wasn’t good.

His left side ached, cold with the memory of what the wraith had done to him and how close he had come to something worse than death.

And how their beloved little sister had suffered that same fate.

Give your sister my regards.

Valen had filled him in on his theory when Esher had regained consciousness days after the attack. Days. He was still healing from the wound too, and it had been weeks now. Would it always bother him? Would he always bear this reminder that he had almost lost his soul, and owed a human his life?

He had enough scars to deal with, enough pain to last an eternity without this adding to it.

He rubbed at his side, his lips compressing as he gritted his teeth and anger surged again, a need to lash out and fight, to hunt down the wraith who had done this to him and make him pay for it, and for Calindria’s deathless state.

Valen had broken it to him as gently as possible, but the idea that Calindria’s soul was missing, sucked from her by that fiend, and was still lost now, centuries later, had sent him into a rage so dark and consuming that Keras and Daimon had been forced to shut him in the cage.

Esher shuddered as he closed his eyes and gripped his side, holding himself. Gods, he despised the cage. He hated feeling trapped and helpless, stripped of his ability to teleport and forced to endure confinement.

For the sake of the fucking humans.

It was their fault he couldn’t bear it.

They should be the ones to suffer when he lost his fight against his other self.

They should be the ones to suffer when the lunar perigee hit.

But he was the one locked away, bound just when the pull of the moon made him strongest, unleashed all the fury he struggled to hold inside him every damned day, for the sake of a race who didn’t deserve it.

“Esher!” Daimon’s palms hovered close to his face, framing it as best he could without touching him.

Esher’s cheeks chilled anyway, just being close to Daimon enough to sap his heat. It was a bane both Daimon and Ares had to bear. Their powers had manifested in the mortal world, their ice and fire making them dangerous to touch.

“I want to kill him,” Esher growled and pushed away from his brother. He paced a few feet across the open space between the TV area and the dining area, and then pivoted on his heel to face his brothers again. “He deserves to die. I want him dead. I need him dead… he should suffer for what he did.”

He shoved the flat of his palm against his chest and dug his fingertips into his dark grey shirt.

“I can’t settle until he’s paid for what he did… or until she comes.”

“We all want to kill him, Brother, but we need information first, remember?” Ares’s careful words as he stood and moved to face him had Esher’s gaze flicking to Cal, a brief glance that he hoped their youngest brother didn’t notice.

Cal didn’t know that the wraith had been responsible for what had happened to Calindria, and his brothers were right to keep him in the dark. He couldn’t know. Not yet. Not until they knew whether they could retrieve her soul or not.

It would send him over the edge.

Esher huffed and paced across the tatami mats to the opened panels opposite the entrance, and stared into the garden, trying to find peace there even when he knew he wouldn’t.

There was only one path to peace for him now.

Once the wraith was dead, and whoever was due to come after him finally made her appearance, he would find peace.

He needed to get it over with, needed to send them screaming into a black eternity of suffering.

Into a hell of his own making.

He would put their damned souls in the vilest, most horrific place imaginable, condemning them to rot there forever.

Esher scrubbed his hand over his side, wrapped his arms around his stomach and toyed with the bandage on his forearm again as a feeling went through him, one that had been bothering him since he had come around after the wraith attack.

Cal wasn’t the only person his brothers were keeping in the dark.

There was something they weren’t telling him too, and it unsettled him, kept him on the edge and made it difficult to retain control. It pissed him off too, even when part of him knew that if they were keeping a secret from him, it was probably for a good reason.

He tried to listen to his brothers as they discussed everything Valen had learned from the two daemons who had attacked him—an incubus and his succubus sister. Ares mentioned the daemon who had attacked him, one who had stolen his power. Both events had brought the wraith out of hiding.

Maybe when the female due to come for him finally attacked, the wraith would make an appearance again.

Esher would be ready for him. 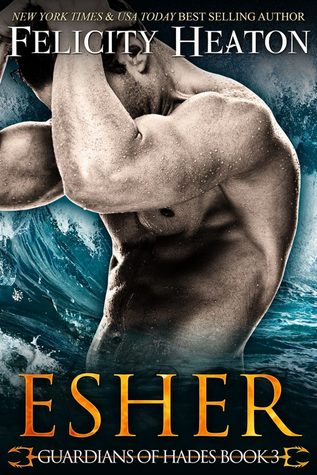 Prince of the Underworld and Lord of Water, Esher was banished from his home by his father, Hades, two centuries ago and given a new duty and purpose—to keep our world and his from colliding in a calamity foreseen by the Moirai.

Together with his six brothers, he fights to defend the gates to the Underworld from daemons bent on breaching them and gaining entrance to that forbidden land, striving to protect his home from their dark influence. Tormented by his past, Esher burns with hatred towards mortals and bears a grudge against Hades for forcing him into their world, condemning him to a life of battling to keep a fragile hold on his darker side—a side that wants to kill every human in the name of revenge.

Until he finds himself stepping in to save a female—a beautiful mortal filled with light and laughter who draws him to her as fiercely as the pull of the moon, stirring conflict in his heart and rousing dangerous needs long forgotten.

Aiko knows from the moment she sets eyes on the black-haired warrior that he is no ordinary man, just as she’s no ordinary woman. Blessed with a gift, she can see through his stormy façade to the powerful god beneath, and the pain and darkness that beats inside him—pain she grows determined to heal as she falls deeper under his spell and into his world.

When the daemon bent on turning Esher against his brothers makes her move, will Esher find the strength to overcome his past and fulfil his duty, or will the lure of revenge allow the darkness in his heart to seize control, transforming him into a god intent on destroying the world.

Enter the grand tour-wide giveaway to win a $75, $50 or $25 Amazon Gift Card at the Esher book page. This giveaway is international and open to everyone, and ends at midnight on April 8th.