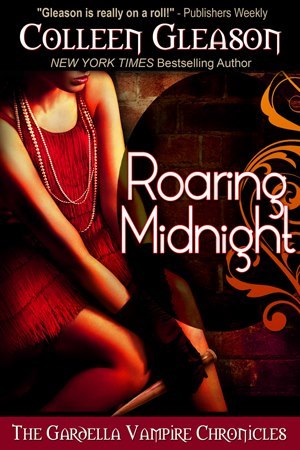 Amid the glitzy age of Jazz, when gangsters and bootleggers control the cities, there lies another, more insidious threat….the undead.

Macey Gardella is a typical young woman of the Roaring Twenties: she works a job, has her own flat, and loves to dance the Charleston. But when a mysterious man named Sebastian Vioget informs her she belongs to a family of vampire hunters, Macey is stunned and disbelieving.

Yet, strange and frightening things begin to happen, and when Macey comes face-to-face with one of the fanged creatures, she has no choice but to believe Sebastian. And when she learns his own soul depends on her willingness to carry forth the family legacy and hunt the undead, Macey capitulates and joins the fight.

As she begins to learn about her new calling, Macey encounters a handsome newspaper reporter known as Grady--who seems to know more about vampires than he should. And when he begins to ask too many questions, she has to juggle her strong attraction to him with the need for secrecy.

Slipping into speakeasies and sampling bootlegged whiskeys, dodging gangster gunfire and trying to keep her nosy landlady from finding the stakes in her flat, Macey Gardella must navigate through a world of stunning violence, passionate romance, and dark betrayal...


The original five book series, The Gardella Vampire hunters, were all five star reads for me. I couldn’t put them down once started and I literally flew through the whole series. The author continued the series a hundred years in the future and set it in the Roaring Twenties-hence the name Roaring Midnight. The main character of this one is of the Gardella linage and is the several greats granddaughter of Victoria, the strongest and most accomplished Venator (vampire hunter) of her time-and the heroine of the first five books. For some unknown reason, this book sat in my tbr for almost two years. Big mistake on my part!

Macey Denton is a typical young woman of her time. She works at a library, lives in a small apartment-complete with nosy landlady-and dresses as a flapper when she goes out dancing with her friends. She finds a book on the Gardella vampire hunters in her stack of file backs at the library and instead of trying to file the ancient tome, she takes it home to read it. Good thing too since she comes face to face with a vampire in her apartment. Let’s just say, she was up for the task. Turns out the other venators of the area(Chicago)are just waiting for her to become one of them officially.

I really liked Macey as a character. Yes, she was typical, but that’s why she was interesting to me. A young woman with zero knowledge of her family and it’s legacy gets thrown into an underground world that other human’s have very little knowledge of, if at all. She has to learn everything from the ground up. And she’s not always smart about some of her actions. She learns the hard way that she is no longer safe at night and neither are people that are close to her. She meets Grady, a savvy newspaper reporter, and one that knows about the vampires. I did like Grady, but there’s also a couple of fellow venators that take an interest in Macey as well. Sebastian, from the first five books, is in Chicago now and is just as charming as ever-only now he is a vampire. And a venator? Yes, and there’s a story there. Chas is a venator with a deep secret vice. He also speculates about being “with” Macey. As for Macey? She pretty much falls for Grady knowing it would never work due to her calling as a vampire hunter. Or can it? That’s for a future book, maybe? A surprise character, Al Capone was a pretty fascinating character as well. Evil, too.

Gleason’s world building is spot on-as always. I immersed myself in this story and I could just picture the twenties right down to the clothes, the colloquialisms of the time, the speakeasies, the gangsters, the cars, all of it. It was impressive how much research the author had to have done to get it this perfect.

The story was full of action, especially the whole last part of the book which was pretty much non-stop action. There’s also romance, deaths, injuries, gangsters, and plenty of evil vampires to kill. This book seemed shorter than the other books, but maybe that’s because I would have loved to have had a longer story. But, I will take a book in this well imagined world any way I can get it. Highly recommended to adult urban fantasy or paranormal romance fans.

FYI-It’s not necessary to read the first five books, but I was glad I had or I might have been a little lost. But that’s probaby just me.