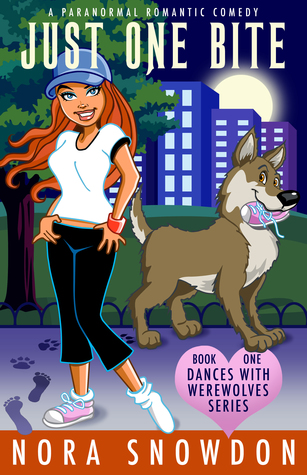 Rosie has met the man of her dreams... Or could it really be her nightmares? After fabulous sex, he suddenly disappears. He re-enters her life in time for her to discover he's being forced into a shotgun wedding.

Lucas finds in Rosie everything he's ever wanted in a mate. Only problem is, she's human. His werewolf parents want him to marry a nice girl with a fur coat, but the woman they've chosen is a bitch in more ways than one. When his fiancée Annabelle accidently bites Rosie she is thrown into a whole new fuzzy lifestyle.

If Lucas can just downplay the negative aspects of being a werewolf - fleas, the desire to chase motorcycles, and Uncle Harold - maybe he can convince Rosie that Annabelle's bite is actually a good thing. Now that she too is a werewolf, they can be together.

Can Lucas win back the love of his life? Can Rosie love a man who moonlights as a wolf? A sexy comedy that will have you howling...


I fell for the cute cover, and because Nora Snowdon’s humoristic writing style is supposedly comparable to that of Dakota Cassidy’s whose werewolf books I’ve enjoyed in the past. To my disappointment, JUST ONE BITE was neither funny nor quaint. Lucas had already accumulated three strikes by the halfway point, so when Rosie continued to pursue a romantic relationship with him after that, I was done with both of them.

You’re probably wondering how one man could manage to irreparably screw up his chances of winning the reader over by the 50% mark of a novella. Lucas’ first offense was stalking Rosie until she agreed to a second date after a chance meeting in a club. His second was disappearing in the middle of the night after sex. And, to round it out, he allegedly knocked another girl up, and is refusing to take responsibility.

A real winner, right? Ok, so a lot of the above-mentioned behaviour stems from Lucas being a werewolf, and eventually gets explained. But I’m sorry, I don’t care how good looking you are on two legs or four, if I hooked-up with a guy, and that was my initial impression of him, I would probably be filing for a restraining order ASAP. The author did absolutely nothing to justify me sticking around to give this man a chance.

Had the whole debacle been told in more of a comical tone my opinion of this short would have been different. However, other than Robert getting neutered by the ASPCA while in wolf form, I didn’t even crack a smile. The couple’s relationship went from run-for-the-hills to happily-ever-after in a nanosecond. I liked the bits where Rosie used werewolf Lucas as a therapist, but that’s the only positive thing I have to say.

JUST ONE BITE was a load of garbage.

3 responses to “Review: Just One Bite by Nora Snowdon”