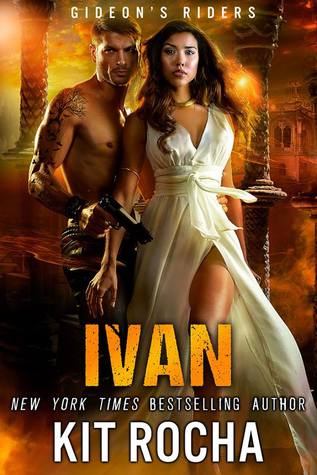 As the sheltered princess of Sector One, Maricela’s life is defined by duty: to her people and to her family. Her wealth and influence have allowed her to build a better world, but they come with a price—the responsibility to secure political stability with a practical marriage. Maricela cherishes the idea of marrying for love, but there’s not much romance in the endless line of suitors interested only in prestige and power.

And her handsome, brooding new bodyguard isn’t helping the situation.

Ivan is the perfect, deadly warrior, a man trained from childhood to be the ultimate protector to the Rios family. His focus on keeping her safe is intense–and a little intoxicating. When the threat of danger cracks his icy control, Maricela realizes she’s not the only one fighting against temptation.

Ivan knows that the blood on his hands makes him unworthy of the pure-hearted princess. But from the first kiss, their forbidden affair feels inevitable. He can give her a glimpse of life outside her gilded cage and a lover who wants the woman instead of the crown. The only thing he can never do is promise her forever.

Because spurning her noble suitors to marry her bodyguard wouldn’t just be a scandal. It could set off a political firestorm that would tear Sector One apart.

I was very excited to start the next book in the Gideon’s Riders series. I really love my time in the Sectors. In Sector One, Gideon Rios is not only the leader of the sector, but he is also the religious leader. All the people in the sector treat Gideon is divine. He is infallible in the people’s eyes. His grandfather is a prophet. The Riders are his soldiers. They protect the Rios family and the people of Sector One. They basically swear their life to the sector.

Ivan is a Rider with quite the history. His childhood was very difficult. His father died protecting one of the Rios family. His mother moves in with his uncles. They then do the unthinkable, they attack the Rios family. His mother was then shunned for the actions of her brothers. She had a hard time finding a job, which made raising her done very difficult. But Gideon didn’t hold such grudges against someone who did nothing wrong. He had no qualms about Ivan becoming a Rider. Ivan is even assigned to be the personal guard of Maricela, Gideon’s baby sister.

Maricela is no longer a child, but her older brother and sister don’t seem to see her as anything but innocent. But everyone is wanting her because of the access it would give them to Gideon. She lives the life of privilege, but it is a lonely existence. She doesn’t get to do things for herself. Everything is for what is best of the sector.

This series is so much fun. I really love all the Riders. Ivan is a brooder. He is very focused on being the best Rider he can be. He doesn’t take any time for himself. He works on keeping the sector safe. His hobby is cleaning his blades. Maricela is sweet and isn’t as innocent as she seems. Not only does she have a dirty side. She also has a secret of her own, which ways heavily on her.

This is a slow burn and forbidden romance. Bodyguards aren’t supposed fall in love with their charges. There is also action as there are deaths to investigate. There also has been people targeting the Riders. There is plenty of action and suspense to keep you on the edge of your seat.

There are a few things I really loved in this book, that weren’t a huge part of the plot, but I loved them so much, I have to mention them.

After twenty years of trying so, so hard to overcome the legacy of his uncles, Ivan had discovered that blasphemy did, indeed, run through his blood. Because fantasizing about putting his hands and mouth all over the sheltered Rios princess had to be a least a little bit treasonous. Maybe he should focus on that. The treason. Add Gideon to his mental image. More specifically, Gideon finding out that Ivan wanted to do dirty, dirty things to Gideon’s baby sister. After all, Sector One might embrace love, but big brothers were frequent hypocrites.

He could protect Maricela from physical harm, but he couldn’t protect her from the demands of who she was. No matter how much he wanted to.