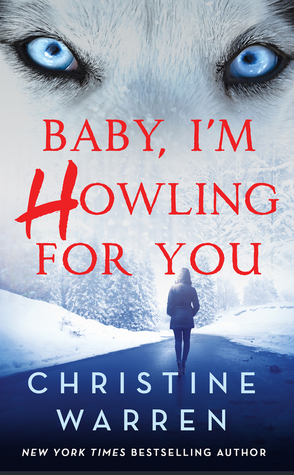 WELCOME TO ALPHAVILLE, where the she-wolves and alpha-males play. . .for keeps.

Renny Landry is a wolf on the run. Pursued by a shapeshifting stalker and his slobbering pack of killer coyotes, she is forced to flee her job as a librarian to find sanctuary in the wooded hills of Alpha, Washington. A well-secluded safe space for troubled shifters, Alpha is Renny’s last hope. But the first person she meets there is a gorgeous alpha male with fiery eyes, fierce tattoos, and one ferocious appetite—for her…

Mick Fischer thought he left his past behind when he moved to Alpha. But fate has a way of biting him in the tail when a female wolf shows up on his property. Wounded, desperate—and disarmingly hot—Renny brings out the snarling, protective alpha beast in Mick like no other woman he’s known. Can these two haunted, hunted wolves manage to mate for life…even as the deadliest past demons howl at their heels?

I was a huge fan of Christine Warren’s Others series. I remember reading them years ago. I tried the Gargoyle and it just wasn’t for me. But that was okay. Now that she was back with shifters, I was excited to give her a try again. I’m a huge fan of shifters, as most of you already know.

So, I started this book and really flew through the first 30ish% of the book. I really liked Renny. She is a red wolf shifter on the run from a stalker, a coyote alpha. He keeps sending his enforcers after her. She never agreed to date this guy and he isn’t taking “no” for an answer. She decides to run to Alpha, a town that is made up of shifters. At least then she won’t be putting humans in harm’s way.

Mick is a lone wolf and with a bad past. He had a mate once, that is until his grandfather and alpha decided she wasn’t purebred enough for him. His grandfather had his mate killed. That is when Mick went on a murderous rampage, and who could blame him. He expected to die after his mission was done. Most wolves don’t survive the loss of their mate, so he wasn’t expect to and he wasn’t happy about it. Now he’s just a bestselling graphic novel writer and illustrator. That is until a wolf collapses in his yard.

So I really enjoyed the characters living in Alpha. Zeke, the sheriff deputy and lion, along with his sister, Molly, the lioness and EMT, where a lot of fun. Then there is Marjory, the wanting to be retired librarian and wolverine shifter was really great. I even thought the villains, the coyotes, were great characters for the most part. They seemed exactly how you would expect a gang leader would stalk someone. And that was pretty much the way the alpha of the coyotes ran his pack.

My issue with the book is a few things. One: the relationship issues between the two. They have that mate, instalove thing going on. While that isn’t my favorite trope, I’ve read many versions of this trope that didn’t bother me. I’ve even read some that the shifters tried to fight that pull. But this one, just rubbed me the wrong way. Mick fought it tooth and nail. I don’t blame him, it must’ve been hard to lose his first mate and survive it. But then less than 24 hours later he’s biting her and mating her without her permission. He takes her back to his cabin and they continue this mating dance, where she returns the mating bite. Then there is enough sex to last a year. I was sore just reading it.

Two: now that they’re mated, the issue with both of their pasts are out in the open. You would things would get better, right? Wrong. Mick is still so tight lipped it is annoying. He’s all about sex, but shows her nothing outside of sex. She tries to get him to talk and he just clams up more. She does make some headway, but it isn’t easy for her.

Three: He goes all alpha male on her, constantly. She pushes back and even mentions that she understand that she is in danger and needs to be protected. She just wants to be part of the conversation and decision making. I feel like she is very reasonable and that Mick just can’t help himself. He is very worried that Renny will go the way of his first mate. While, I can understand his concern, still. When he said he wanted to lock her in a cell with half the sheriff’s department standing guard while he goes out with the other half to hunt down the coyotes, that was when I had decided that enough was enough. She had tried to reason with him and wasn’t at all trying to put herself in danger, but I would have to put a stop at some point. So I decided that I had read enough. I was tired of reading her being treated that way.

I have to say that I liked the characters, except for Mick. He was just too alpha for me. He needed to work with her, not overtop of her. He was very caveman. I really enjoyed the time with the others though. I wish I spent more time with them.

I even liked the suspense part of the story. I thought the coyotes made great villains. I liked the stalker aspect (though I never want to be on the receiving end of this kind of crazy). I wish there was more of this in the story.

So, when the story focused on the suspense and Renny trying to get her life back together, I really enjoyed it. The romance, though, was a big fail for me. I’m trying to remember if the Others series was this overly alpha. I remember some pretty alpha males, but I thought I remembered the women getting through to them and not being hampered or ignored the way Renny was.

24 responses to “Review: Baby, I’m Howling for You by Christine Warren (@mlsimmons, @StMartinsPress)”