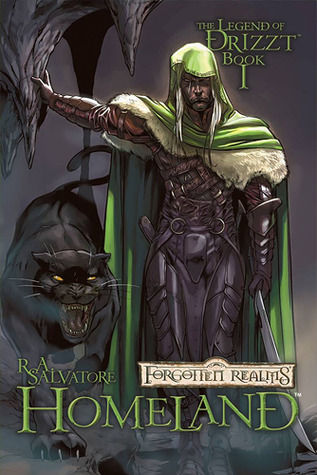 Adapting the famous series by R.A. Salvatore, beginning with Book 1 of the Dark Elf Trilogy, Homeland. Travel back to strange and exotic Menzoberranzan, the vast city of the Drow and homeland to Icewind Dale hero Drizzt Do'Urden. The young prince of a royal house, Drizzt grows to maturity in the vile world of his dark kin. Possessing honor beyond the scope of his unprincipled society, young Drizzt faces an inevitable dilemma. Can he live in a world that rejects integrity?

I didn’t grow up playing D&D. I’d love to be able to say I did, but I’m not that geekfabulous.

I did grow up watching my only-ten-years-older-than-me uncle play D&D. And he was cool before geek was cool. For real. I’d even credit him with helping pave the way for the rest of us. All my friends always had huge crushes on him. They were super jealous that he came to pick me up from elementary school in his Jeep Wrangler, blasting not-country on his way home from high school, while they were getting picked up by their mom in a minivan.

Not gonna lie. It was awesome.

As was everything he did, as far as I was concerned. My grandmother—the one who raised me on fairy tales, so Uncle came by it honestly—would flip through the monster manual (NOT Manuela, autocorrect, geez) with me, and we’d read the descriptions together (also awesome).

So yesterday, when I saw that the first four volumes of THE LEGEND OF DRIZZT, THE GRAPHIC NOVEL were on sale for $3.99, I was all over it.

And when I read it, I was #confusedaf.

ALL DROW LOOK THE SAME. AND HAVE WEIRD-ASS NAMES. And some of their identities are DELIBERATELY obscured for later Big Reveals.

I mean, ultimately I enjoyed it, but only after flipping back and forth MULTIPLE times, trying to figure out who was who and their relationship to Drizzt.

But when I finally got everyone straight, it was a compelling idea: inexplicably moral dark elf surrounded by uniformly Bad dark elves. What to do? ALSO, there’s a really cool cat demon thing.

I was entertained enough that I looked up the actual books. There are twenty-three in the main series.

And wouldn’t you know that all but one of them is available for instant gratification download b/c ebook.*

Wanna guess which one doesn’t have a kindle version?

If you said, “the first one,” you are not wrong. *bangs head against wall*

I discovered last year, during my must-know-ALL-the-STAR WARS-things phase, that I can (under the right circumstances) absorb an audio book (I have auditory ADD, and yes, that is a real thing), so I found an alternate way to one-click. Bwahaha.

Unfortunately, the narration sucks (NOT the right circumstances). Dude speaks at that weird speed that is too slow, but just fast enough that even increasing the narration to 1.25 speed sounds ridiculous.

Also, I’m boycotting paperbacks, b/c if I don’t want it enough to pay for the hardcover, I can’t spare the shelf space. #firstworldproblems

SO. All you D&D people: is this series good enough to further investigate, or am I better off sticking with the graphic novels and calling it a day. Not asking Uncle, b/c I’m pretty sure I already know what he’d say, so help a noob out, plz.

The Legend of Drizzt: The Graphic Novel:

Don’t forget—the first four are on sale for $3.99 each, which is freaking cheap for a graphic novel.