“Wyatt?” she said, surprised at how breathless her voice was.
She was panting, Elspeth realized. The man hadn’t even touched her and she was panting like an overheated dog . . . or a horny one.
“I’m sorry,” Wyatt growled, and turned away to quickly search the room, and then spotting the bath towel over the towel rack, he grabbed it and turned back to offer it to her.
Elspeth reached for it, but froze when their hands touched. For a minute, they just remained like that, both silent and still as shockwaves rolled through them, and then Wyatt cleared his throat. His voice was husky as he said, “I know you’re not ready for a life mate, and I-“
That was as far as he got before Elspeth ﬁnished taking the towel from him, let it drop to the ﬂoor, and reached for him instead. LYNSAY SANDS is the nationally bestselling author of the Argeneau/Rogue Hunter vampire series, as well as numerous historicals and anthologies. She’s been writing stories since grade school and considers herself incredibly lucky to be able to make a career out of it. Her hope is that readers can get away from their everyday stress through her stories, and if there’s occasional uncontrollable fits of laughter, that’s just a big bonus. 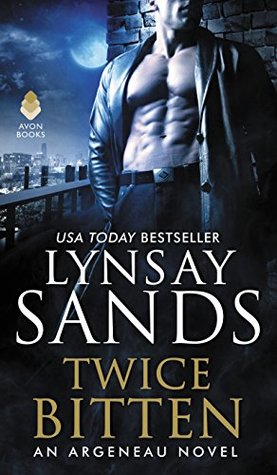 Thrilling, witty, and oh-so-sexy, Lynsay Sands’ Argeneau novel brings together a beautiful Immortal and the man who is her destiny…

For someone who’s been around for over a hundred and forty years, immortal Elspeth Argeneau hasn’t done a whole lot of living. Now that she’s moved away from her controlling mother, she’s tracking down rogue vampires and enjoying some overdue freedom. A fling would be fun. A life mate can wait. Yet to Elspeth’s surprise, her landlady’s hot grandson checks both boxes.

Wyatt fell instantly in love with Elspeth four years ago. He’s stunned to run into her again, especially as she has no memory of him. Then again, there are a lot of things about Elspeth that don’t make sense, like the miraculous speed with which her wounds heal. And the chemistry that transforms every touch into an explosion of desire. But with mysterious “accidents” besieging Elspeth, the ex-Special Forces soldier appoints himself her bodyguard. But time is running out to uncover the truth about her enemies—and rediscover the man determined to love her for eternity.

Each book in this series can be read as a standalone story.

Open to US shipping addresses only. Five winners will each receive a paperback copy of A Quick Bite by Lynsay Sands. This giveaway is administered by Pure Textuality PR on behalf of Avon Romance. Giveaway ends 4/6/2018 @ 11:59pm EST. Avon Romance will send the winning copies out to the winner directly. Limit one entry per reader and mailing address. Duplicates will be deleted.