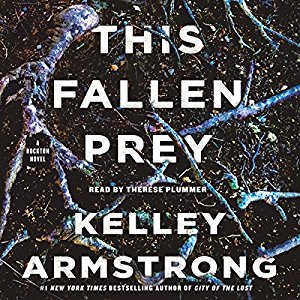 I’m so excited to be back in Rockton. I fell in love with Casey, Sheriff Dalton, Deputy Anders and the rest of the Rockton residents (well, at least most of them) in the first book and it only grew in the second book. Now to be in the third book, I learn more about some of the residents and more about the secretive council. We also get to meet some of the residents of the First Settlement, a group of people who left Rockton to live in the wilds.

So this story starts off with a plane flying into town. This should not happen. Only Dalton flies into town, so who is this person coming into this secretive town? A man is delivered with just a note. The residents of Rockton are to keep this man, an alleged serial killer, prisoner until other accommodations can be made.

There are reasons to believe that this person might be innocent. The man claims to be, but aren’t prisons full of innocent people? Casey has no reason to trust the council. They’ve proven themselves untrustworthy on more than one occasion and that is just since Casey has been there. She would like to investigate this crime, but it is hard to do when you don’t have internet and can’t leave the town of Rockton.

Things really go sideways when this man escapes and runs out into the woods. People start turning up dead, which makes Casey question his innocence after all. There seems to be a sniper out there shooting at them. When people from the First Settlement end up dead, things go really wrong.

This story is just as fast paced as the previous books. It might even be a bit faster. Casey and Dalton barely have time to sleep. There is a lot with Storm, Casey’s Newfoundland puppy. She is training her to be a police dog, tracking and some other things. She is integral to tracking down this alleged serial killer in the woods, but she is still early in her training and causes some really large issues. She also learns that not all people love her, which is new, as the only dog in Rockton.

I had a great time with this story. There is quite the cliffhanger at the end. I know when I was listening, things were just going along and all of a sudden, the story came to an end. This isn’t something new for Kelley Armstrong. She does seem to leave a lot of cliffhangers out there. Not in every book, but often enough. It will be difficult to wait a whole year to find out what happens. If you haven’t tried this series, I highly recommend it. Kelley Armstrong is known mostly for her paranormal stories, but she is great as a straight up Thriller writer too. I’m a fan of her Nadia Stafford series too.

Narration
I continue to love Thérèse Plummer’s narration of this series. There are more men than women in this story (a product of what Rockton is), but she handles the large cast of men with ease. We do meet a young girl from the First Settlement in this book. I think she did a good job with making the voice of a teenager. I would highly recommend Plummer as a narrator. I love her narrations. I’ve found that I’ve enjoyed her narration of other series too.