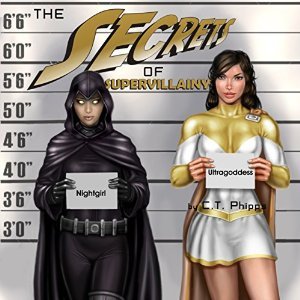 Merciless, the Supervillain without Mercy (TM) is back with even bigger problems! How far will he go to fix his wife's current state of being a soulless vampire? Can he ignore his growing feelings for Cindy, despite their difference over the new Star Wars movie? Can he survive the wrath of the President of the United States (who he accidentally stole billions from)?

While he ponders those personal issues, Death has a new mission for him. The greatest hero on Earth has killed and she isn't pleased. Death wants the murder solved and the perpetrator given the kind of justice only the Avatar of Death can dish out. Unfortunately for Gary, that's only the tip of the psychotic iceberg.

Merciless, the Supervillain without Mercy (TM), aka Gary Karkofsky along with Cloak have their hands full in this book. Gary is trying to fix an issue with this wife that happened in the previous book. He has also, once again, found himself doing things for the side of good. Gary has always wanted to be a supervillain, ever since his supervillain brother died. Now that he has that chance, he keeps finding himself on the superhero’s side.

This time, he is fighting President Omega. Of course, Merciless has his helpers. Little Red Riding Hood aka Cindy, his favorite henchwench and best friend is there to help. Diabloman is there to help as well. Then there is also the superhero, Ultragoddess, aka Gabrielle. Oh, and she is Gary’s ex-fiancee. There are some new supervillains too, Fruitbat and Nicky Tesla. I really loved Fruitbat (but then I really I love fruit bats in real life (they are just so cute).

I was a little surprised by the bit of a love triangle. Gary does seem to have some relationship drama with his wife’s current issue, his henchwench is in love with him, and his ex-fiancee all fighting against President Omega. Oh Death makes a couple of appearance too. She gives Gary some pretty difficult choices to make.

I will say that I didn’t like this story quite as much as the first two books. I thought Gary had a little too much relationship drama and was throwing himself a bit too much of a pity party. I did still enjoy the story. There are a ton of one-liners that I loved. There is also some good action scenes. As always, there are great pop culture references. I’m excited to get to the next book.

Turning back to the Merciless Mobile I hit the remote on my keys and the vehicle lowered into a secret alcove beneath the streets. I then headed to the front gate that open automatically at my presence and walked to the front door. Diabloman headed off to his unmarked white van.
“See those diamonds get to the Children’s Relief Fund.” I called out to Diabloman.
“I would not steal from children’s mouths.” Diablo Man called back. “Everyone else, yes.”
I chuckled.
“Do you think he is going to take any?” Cindy asked.
“Nah.” I said. “He’s skimming off the top from all the other businesses, just like you.”
“Only for good causes” Cindy said, putting her hand over her breast. “I being a very good cause.”

Narration
Jeffrey Kafer continues to do a great job with this narration. He always adds the correct inflection needed for the scene. I think he does a really great job with the male and female voices. Kafer has quickly become one of my favorite narrators.