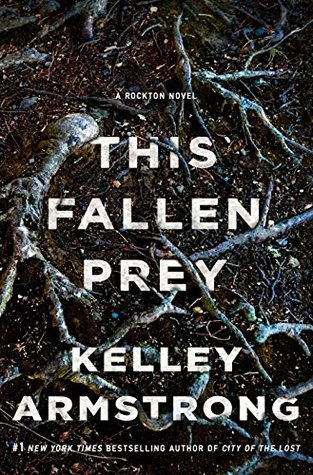 Last year, when we discovered that amongst the residents of Rockton lived a serial rapist who would abduct a woman, fake her death (by dressing and strategically positioning the mauled and thus hard to identify corpse of another woman of roughly the same dimensions in the clothes the abductee was last seen in), hold her captive for months (more than a YEAR in one case), raping and torturing her until she died (for real this time) before choosing a new victim and beginning his twisted cycle all over again, I thought Armstrong had peaked.

Not that the series itself had peaked, but that future installments would need to seek out alternative avenues to continue the Bigger and Badder trend a series is wont to pursue. The creep factor had topped out.

Armstrong: SILLY HUMAN, I AM KELLEY ARMSTRONG. I DO NOT PEAK. *laughs maniacally* *twirls mustache* 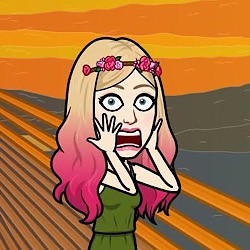 You: What is creepier than diabolical serial rapist guy!?

Which is exactly what Rockton gets when an unscheduled plane lands and discards:

” . . . a thrill killer,” I say. “He murders because he enjoys it. Tortures and kills. Five victims in Georgia. Two men. Two women. And one fourteen-year-old boy . . . Oliver Brady is a killer motivated by nothing more than sadism . . . An unrelentingly opportunistic psychopath.”

You: Okay, I know we learned the “council” could be a bit sketch on the residents’ backstories in A DARKNESS ABSOLUTE, but a serial killer? Really??

Me: YEP. But he’s not actually meant to be a “resident” this time—more of a temporary prisoner—and at least they’re told up front that this dude is a serial killer . . .

But regardless of whether or not Oliver Brady is what he’s accused of being, his presence wrecks havoc on the town created for those who need to disappear. Numerous well-liked citizens are placed on the chopping block, leaving you with decimated fingernails as you frantically read to learn their fate.

It is b/c of this personally experienced terror that I’m going to—for the first time ever—offer you an unnecessary spoiler. In the spirit of doesthedogdie.com:

View Spoiler »NO, thankfully, she does not. *hyperventilates* « Hide Spoiler

BUT. Despite Armstrong clearly not having peaked, I had a couple of minor issues that kept this installment from the 4.5 – 5.0 star ratings of its predecessors.

1. The council threatening to oust Dalton if he doesn’t walk the line is getting effing tiresome.

There’s only so many time you can use a specific threat before it starts to lose its effectiveness, and I reached that point in the last book.

Shut up, Phil. You’re not sending him anywhere. And if you do, he’ll make a new and improved Rockton elsewhere and be happier for it.

2. There are suddenly a LOT of various “others” in the alleged Yukon wilderness.

More than I could countenance. Especially considering the convenience of some of their identities.

3. Despite the soundness of her reasoning . . .

View Spoiler »It’s a weak move to repeat the misdirection used in the last book to hamper a body’s accurate identification. « Hide Spoiler

4. All those bombs dropped in the final pages.

View Spoiler »I mean, really—what is the deal with Petra? And beyond that, why can’t Casey keep a female friend for longer than an installment? Why they all gotta be shady bitches?

Then, adding insult to injury, that revelation is followed by the possible hijacking of Casey’s emotionally defunct sister to save Kenny’s life, and speaking of Kenny, why do we care if he dies? Either my memory is seriously deficient, or a nonessential character was placed in jeopardy, making the lack of resolution on that front just irritating. « Hide Spoiler

All of that being said, THIS FALLEN PREY is still a stellar read in a series of exceptional reads. Armstrong cleanly laid the groundwork for multiple future developments, including some of Casey’s ongoing suspensions concerning the evolution of a “hostile.”

Dalton was his delightful self:

Shortly after we installed the bell someone rang it in the middle of the night. Drunk, obviously. Rang it and ran . . . leaving boot prints in the snow, which I matched to a perpetrator, whom Dalton then sentenced to go to each and every person in town and say, “I’m the fucking idiot who rang the fucking bell at two in the fucking morning. I’m sorry.”
No one has touched the bell since.

Casey continues to wrestle with her darker nature:

I want justification for my rage. I do want to see Brady gutshot for this. Gutshot and left in the forest. And that scares me. It’s the sort of thing Mathias would do, and I tiptoe around the truth of what Mathias is, alternately repelled and . . . Not attracted. Definitely not. But there’s part of me that thinks of what he does and nods in satisfaction.

In THIS FALLEN PREY, Armstrong keeps you guessing right up to the end about the true nature of Rockton’s newest (sort of) inhabitant, and when you finally get the full story, I can almost guarantee it won’t be what you expected. I don’t know what the future holds for this settlement and its occupants, but once again, I’ll be impatiently waiting to find out. Still very much recommended.