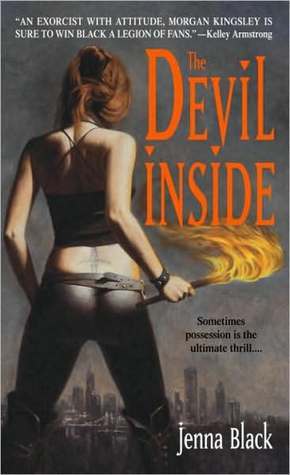 Exorcism isn’t a job, it’s a calling—and a curse. Just ask Morgan Kingsley, a woman who has a stronger aura than any Demon. Or so she thought. Now, in a pair of black leather pants and a kick-ass tattoo, Morgan is heading back to Philadelphia after a nasty little exorcism—and her life is about to be turned upside down…by the Demon that’s gotten inside her.

Not just any Demon. Six foot five inches of dark, delicious temptation, this one is to die for—that is, if he doesn’t get Morgan killed first. Because while some humans vilify Demons and others idolize them, Morgan’s Demon is leading a war of succession no human has ever imagined. For a woman trying to live a life, and hold on to the almost-perfect man, being possessed by a gorgeous rebel Demon will mean a wild ride of uninhibited thrills, shocking surprises, and pure, unadulterated terror. . . .

This was my very first Jenna Black book several years ago (as in 2009). I was trying to decide what book I wanted to try next. I decided that I wanted to go back and revisit this series that I loved so much. I read this before I was reviewing, so I decide that I could review it this time around.

So, this series follows Morgan Kingsley. She’s an exorcist and one of the best. In this world, people willing take demon possessions. It allows humans to be faster, stronger and heal faster. There are people who take on demons to become firefighters and do other dangerous jobs because of these enhancements. The problem is that the human is no longer driving the body. They are pushed to the background so that the demon will be in control. To many, that is something they are willing to sacrifice to be a hero. There is a whole religion around it, called Spirit Society.

There’s a whole group of people who are against the demons, God’s Wrath. They are known for attacking people known to possess a demon.

Not all demons possess a body legally. There are many illegal demons that are roaming the Earth and that is where Morgan comes in. She will exorcise any demon that is found to not be here legally. There are times when she isn’t strong enough to force the demon out. If that happens, then depending on the state you live in, the human is burned alive to kill the demon. Think of it like states that have the death penalty versus ones that don’t. I should also add that not every human mind survives having a demon inhabitant. Some people become a vegetable after the demon is cast out. Others can go back to a normal human existence. People don’t know why this happens.

So The Devil Inside starts with Morgan going to Kansas to try to exorcise a demon that has illegally inhabited a little girl. Morgan fights and does kick the demon out, but he does touch her, which would’ve given the demon the chance to jump to her. She has to stay in confinement until another exorcist can come and check her for a demon. Kansas being a execution state, this has Morgan a little worried. She has her friend fly in to check her out.

It is after this exorcism that things really start to get weird for Morgan. She has for a while been sleep walking. But not she is writing notes to herself in her sleep. These notes seem really weird. Strange things are happening around her. Eventually she starts to dream, which turns out she is hosting a demon.

So, I won’t got into this story anymore, because I don’t want to spoil anything. I will just say that this series is action packed and full of suspense. There is a lot that goes on. Several different groups are after Morgan. She has to start to trust people, which is really hard for her.

I won’t say that there is romance in this book. Morgan is already dating Brian before the start of this book. They do have some relationship issues that you might see in a romance. There is sex in the book and not just between the main characters. There is also some sex between two male secondary characters. Though they don’t have sex on the page, it is part of the story. It is something that Morgan struggles with. She isn’t against gays. Not at all. The problem for her is that it turns her on way more than she is comfortable admitting, even to herself.

I would highly recommend this series for someone looking for an action-packed urban fantasy series. Morgan is a strong heroine, but one who has her faults. The world that Black has built here is really interesting. I love the demons that possess people in this world. There is also demonic politics going on. If you’re looking for an older series to check out, this is a great one to try.

23 responses to “Review: The Devil Inside by Jenna Black (@mlsimmons, @JennaBlack)”