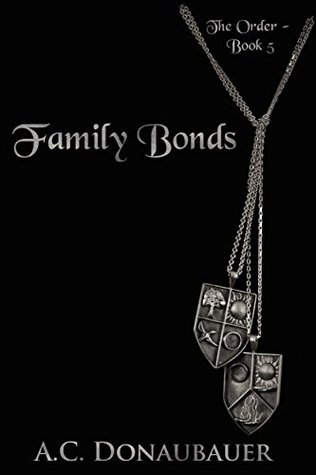 After collapsing the senate roof, Eryn has to face the next challenge: giving birth to her son. Without Enric, who rushed off to foreign parts save Malriel from the difficulties she got herself into. Leading House Aren and growing into her new mother role turns out to be less of a nightmare than she had feared. If only there wasn't the heartbreak of being left behind by her companion.

Experiencing his son's unexpectedly early birth through the mind bond, Enric is eager to take care of the matter with Malriel up north as quickly as he can and return to his family. Being deprived of his sleep by Eryn's nightmares doesn't make his task any easier.

The previous book, Rifts, ended with quite a cliffhanger. This book picks up right where that one left off. Eryn is in the Western Territories of Takhan. Enric has run off to another country to save Eryn’s mother, Malriel, who has been charged with rape.

In this new country, they are big on titles. Enric is referred to as “Lord Enric, Reig of House Aren, second in command of the Order and senator in Takhan”. They use this title everytime they address him. He must then respond with their full name and title. That was a bit annoying, but luckily only lasted a few chapters and it did show the difficulties of working with other cultures. This new country has magicians, but they aren’t really trusting of them. If you’re born with magic, you are forced into one of the five religions. They are big on machines. They are also very secretive. Enric goes through quite a bit to get Enryn a gift. She later receives one of the machines. This place is also big on bureaucracy.

Eryn and her mother still don’t have a good relationship. Malriel is not happy when she learns how Eryn got back at her for the potion that her mother slipped her. Enric though is very proud. Eryn took Malriel’s life saves and used it to build an orphanage. Malriel didn’t take it well.

So Eryn had finally worked out a way to get back at her mother, and an immensely effective one, too. Elegant and in accordance with her own beliefs and values. He was truly impressed. And proud.

Eventually, Eryn, Enric and most of the rest of the gang returns to Anyueel. Before Eryn and Enric return to the city, they take a bit of a detour to visit Enric’s sister. She has a companion and two young children. She also has a very good lumber business. She is a very strong willed woman. Her companion is a large man, but he lets her run the business, while he does some of the lesser duties in the business and cares for the children.

Eryn and Enric also have a meeting with his father, mother, his brother and his brother’s companion. This is a strain on Enric because he doesn’t get along with his father or his brother. And for good reason. Enric was forced to go to the city when he was still a young child when they found out he was a magician. It has been fifteen years since he has been back. When his father was not a good man, I would’ve avoided him too. His brother isn’t any better.

There are also talks within the Order of Magicians and Eryn seems to be in the thick of it. It is no secret that she wants to see changes, so everyone is looking at her. Both the people who agree with her and also the people who disagree. The younger members want to see some new changes to the Order. They are all looking to Eryn to make that happen. Several members of the council don’t want to see changes. Things are really good for them as they are and they fear that changes will make things worse for them. Problem is, that things have to change. If not, Eryn’s child will be the leader in about 20 years because he’s the strongest magician any of them have ever seen.

Orrin grimaced. “Then you’d better make sure to teach that boy that protecting those weaker than him is a lot more rewarding than subduing us. I’m too old to be enslaved.” Then he added as an afterthought, “And don’t even think of making me train that boy sword fighting. If he turns out anything like either of his parents, he would finally drive me insane.”
Eryn patted him on his back and said lightly, “No worries, Orrin. As we are forced to switch countries every six months, it makes more sense for Enric to train him, anyway.”
The warrior’s face broke into a happy grin. “Justice at last.”
Enric raised an eyebrow at him. “Vedric might turn out to be a well-behaved and quiet child for all we know.”
Tyront and Lord Poron both chuckled, and even Eryn looked doubtful.
“Sure,” Orrin chortled. “You just go on believing that.”


So a lot happened in this book, but a lot has happened in each book of the series. I have to say, I continue to love this series. I really enjoy my time with all of these characters, both in Takhan and in Anyueel. The more time I spend with these characters, the more I love them. There is some good banter between them, though I wouldn’t call this a book with a ton of laughs, there are several chuckle-worthy moments. There were even more quotes I would’ve liked to have included, but they also had spoilers.

I asked the author about how many more books in this series and it seems that there are more coming, which I’m excited at hearing, however, I’m now caught up and have to wait for the next release. I hope I don’t have to wait too long. If you like fantasy series, this is a fun one. There is romance in this series, but it isn’t the main focus of the story. We have seen several couples come together in this series, though sex is mentioned, there isn’t any that takes place on the page.