Dain Louvel…22
6 ft 6 in. He has silky straight black hair down past his waist. Dark cherry-wood eyes. Deep dimples when he smiles. Totally buff. He smells like clean soft blankets with green floral tones of alfalfa from Jessy. His wolf form is completely black and almost as large as an Alpha. He can take a Breeder form, stand upright like a man, though he’s not a Breeder. The first time he took a Breeder form, he was angry and defending himself. Before then, he didn’t know he could hold this massive upright form.

The first time he saw Jessy across a cavern during a Moon Dance Ceremony, he knew something inside of him had changed but he didn’t understand it was the sakana bond. The next time he saw Jessy at their parents mating ritual, he caught her scent and realized there would be no other female for him. He felt amazing and scared all at the same time. He thought about approaching her but by the way she acted around the other males, warning them off, he was afraid she’d refuse him as well, so he took off in the other direction. He suffered through the sakana bond while she was away in San Francisco, but didn’t go looking for her because he didn’t want to appear as a stalker especially if she didn’t feel the same toward him. Jessy’s father (and his new stepfather), Kern, told Dain Jessy would come around; she wouldn’t be able to fight the bond forever.

Dain is taking online college classes working on his general ed before applying to a veterinary school. When he realizes Jessy is serious about keeping her commitment with the new job offer she accepted in Albuquerque, he looks into UNM for his science classes because there is no way he’s letting Jessy go anywhere without him.

New indie author, Amanda LeMay writes paranormal romance full of dark, sexy wolf shifters who share a special bond with their mates: the sakana bond. When Amanda is not writing, (or thinking about writing, or characters, or dialogue, or world building), she is working on any number of crafts, but most likely, lost inside a wonderful world built by one of her favorite authors.

Amanda lives with her husband and two grumpy old cats in Southern California. She plots most of her novels while walking, or driving, or while on long Texas beach vacations sitting outside listening to the waves. Her first novel, Kiss of the Winter Moon, is set to release on February 20, 2018. 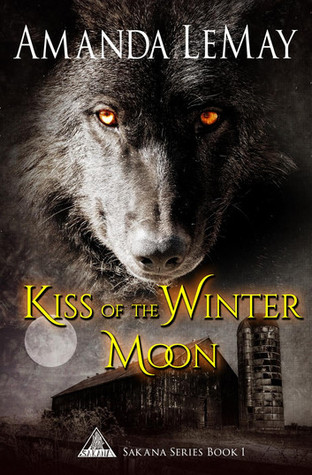 I had a life plan: Get out of San Francisco. Go home. Start my new job.

I wanted to get on with my life. Howl at the moon. Let my wolf side run wild and free.

But when I stopped in Comfort, Texas, to spend a quiet 2-week vacation with family, all of my best-laid plans came to a screeching halt.

I didn’t plan for Dain Louvel. Okay, so maybe I’d secretly hoped to see him, again, but I didn’t expect all those feelings I’d felt for him before to come rushing back and blindside me. I’d moved on. Or so I thought.

The problem is, I didn’t plan on the sakana bond, that rare and precious bond between mates, to connect our minds, bodies, and souls.

I also hadn’t planned on fighting for my life.

I quickly glanced around my immediate surroundings and found the pipes my arms were strapped to had once been an old breeding stall, off to the side of a ramshackle barn. They would have been buried deep and anchored with concrete. Leather straps lined with lamb’s wool were buckled tightly around both of my wrists and I was sure the same thing had my legs spread and secured. If Bobby wanted to hurt me, it wasn’t through these cuffs. I looked down; three bales of hay stacked one on top of the other held me up off the ground. Damn. Even with my extra wolf strength, there was no way I’d ever pull the pipes from the ground.

I was definitely trapped.

The barn reeked of blood and death and decay. Humans had bled in this place. How many, there was no way of knowing, but there were multiple scents, not only of blood, but of rotting flesh buried under layers of earth. The stench of the horrific acts of a sick mind permeated the soil beneath me and I was sure if I’d swept away the litter of loose hay, I’d find the ground darkly stained. The sickening, sweet odor of dried blood seemed to hang in the air—soaking into my skin, twisting my insides, until the urge to vomit was so strong it took all my willpower keep it down.

4 responses to “Character Bio and Giveaway: Kiss of the Winter Moon by Amanda LeMay (@AmandaLeMaybks, @VivianaIzzo)”