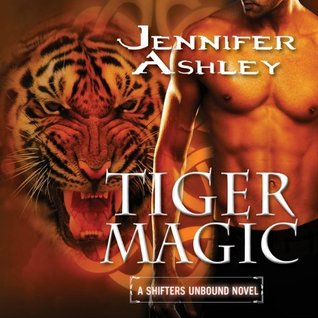 He doesn't have a name. He doesn't have a clan. The humans who held him prisoner for 40 years have taken them away. He knew nothing but captivity until nearly a year ago, when he was released into the light. Now Tiger lives in the Austin Shiftertown, where he struggles to belong and searches for an identity.

Carly Randal thinks her fabulous life is complete - until her car breaks down on the side of the road and the only one around to help her is a wild-looking Shifter. Tiger takes one look at Carly and knows instantly that she will be his mate. As Carly is drawn into Tiger's Shifter world, she risks everything she has for that forbidden something she still wants: passionate love.

The Shifters Unbound series is another one of those that I am determined to read as many of them as I can. However, after starting out reading them in order, I seem to be all over the place as far as the order that I read/listen to them. And you know what? It really doesn’t matter. Sure, the right way is to probably read them in order, but I’ve never been lost or confused.

Tiger, the hero of this book, was first introduced in a previous installment, and to be honest, I can’t remember which one. A tiger shifter with orange and black hair, Tiger had been raised in a cage, horribly tortured by humans, and never given any freedom until he was freed after forty years, and brought to Shiftertown, outside of Austin, Texas. Because of this horrible background, he experiences horrific rage when upset. He has however, managed to build a life of sorts in Shiftertown. He’s learned to be a mechanic and he often takes care of the small children in the town, as he has an affinity with them. When he meets Carly(an ultra feminine human with a southern accent), it’s love at first sight for him and he recognizes immediately that she’s his mate. Carly, however, is already engaged. But maybe not for long?

Because Tiger is not a normal shifter after being experimented on, he is in demand by various bad guy elements-so to speak. This is the basis of much of the action, life and death moments, and all sorts of not very fun moments for him, and in turn for Carly. We meet the various villains, go through Carly’s introduction to the shifters world, and watch a pretty steamy romance develop-and no cheating. All this in a fast paced, well written story that kept me listening pretty much non-stop when I was able.

Wounded by his horrible life, Tiger ended up being a great hero and proved that, time and time again, by his many heroic deeds. Carly was perfect as a non-judgement human woman in a world where shifters are marginalized and bullied. These two together were a treat to read about and I was happy to finally get Tiger’s story. I also loved being back into Shiftertown where more and more of the characters are familiar to me. Not all of the books happen there however, but when it doesn’t happen there it just adds to the story and keeps things interesting. So I am happy either way.

Narration? Cris Dukehart was new to me, but I think she did a fairly good job. Her voice for Tiger was stilted much of the time, but then that’s Tiger’s personality(he’s still learning about his human side)so I thought even that was good. Male voices were actually done well and that’s a criteria for me for good narration by a female narrator. I even thought Carly’s southern accent was spot on. So 4.5 stars for narration and I would be happy to listen to Dukehart again.

Fantastic read and I highly recommend this book and the whole series to adult paranormal romance fans!