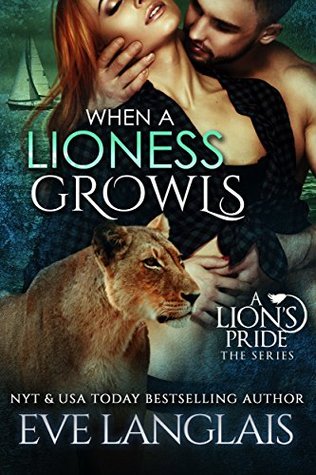 A trip to paradise. A mystery to solve. And a seriously uptight dude who doesn’t know how to smile.

Stacey’s been intrigued by Jean Francois since the moment she first saw his granite countenance. Then when she found out he could fly… She never was one to leave her four feet on the ground. While she might act like a princess, adventure is her middle name.

Under orders from her king, she drags poor JF along with her to an exotic location in search of answers. On the way, they find danger—fun—clues to unravel—stupendous—and a fiery lust that even he can’t resist.

But when it comes to getting the man to make a commitment, this fiery-haired lioness is ready to growl. What will it take to make him admit he cares? Handcuffs come to mind.

I continue to love this series with it’s crazy lionesses. They continue to say things that always make me laugh out loud. In When a Lioness Pounces, we were introduced to a new type of creature called a whampyre. They have some characteristics of vampires, but they aren’t the same. We didn’t learn a lot about them in that book, but we learn more in this book.

One of Arik’s resorts in the Caribbean has some people going missing. He wants to investigate what is going on, especially after seeing a video of what they decide to call a “liotaur”. Think of a minotaur, but with a lion head instead of a bull’s head. Since they want to investigate on the down low, Stacey, the pride’s event planner, is going down to “plan a wedding”. They decide to send a guy with her, posing as her brother, to help guard her. Gaston sends his second in command, Jean Francois. He is a whampyre.

I won’t go into details of the investigation. It was a pretty typical investigation. The romance between the two of them is pretty dramatic. Stacey is a bit crazy, like the rest of her “crew of Baddest Biatches”. Jean Francois is a bit uptight. He also has a thing against shifters. He has a good reason for his dislike, but he needs to get over it.

“I don’t think we’ve had the pleasure of meeting in person before. My name is Stacey Smithson.”
“I don’t really care.”
“What an odd name to give you.”
He glared so she laughed.
“While you might say you’re not interested, I know better, sweetcheeks. You’ve been eye-balling me for a while.” Just like she’d eyed him.
“If you saw me looking, it was only to ensure you didn’t turn rabid and attack me. Your kind isn’t known for being too stable.”
Her smile widened. “You say the most darling things. I will say I am most excited you’ve been chosen to come along as my bodyguard on this trip.”
“As if anything could guard you from your own insanity.”
“True.” How well he knew her already. “But I will enjoy watching you try. You’re an intriguing creature, Jean Francois Belanger. I look forward to finding out how you came to work for Gaston Charlemagne.”
“I might not be employed by him for long. Given his recent orders, I am thinking of updating my resume.” Said utterly straight-faced.
But she could tell he was having fun. Just look at the muscle jumping in his cheek. “You should apply to work for the pride. We have great dental benefits.”
“I’d rather shoot myself first.”
“Aren’t you just a ray of sunshine. I can see we’ll have so much fun together.”
“No, we won’t.”
“Challenge accepted.” She pointed at her suitcases. “Stow those bags aboard and we’ll get ready to leave.”


She clapped her hands. “There you go. That’s the look I want to see you use when you’re jealous. Followed by a vicious mauling.”
“Did it ever occur to you that I do something better than killing?”
“Like what?”
“The best revenge against other guys is to take you into my arms.” He drew her near. “And kiss you deeply, showing ownership.”
“Yes,” she whispered.
“Then slapping you on the ass and telling you to fetch me a beer.” He smacked her butt.
“How is that supposed to make them jealous?”
“If you were a man, you’d understand.” Turning from her, Francois moved off, his gaze intent on the ground.

26 responses to “Review: When A Lioness Growls by Eve Langlais (@mlsimmons, @EveLanglais)”