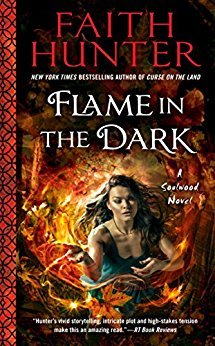 Nell Ingram has always known she was different. Since she was a child, she’s been able to feel and channel ancient powers from deep within the earth. When she met Jane Yellowrock, her entire life changed, and she was recruited into PsyLED—the Homeland Security division that polices paranormals. But now her newly formed unit is about to take on its toughest case yet.

A powerful senator barely survives an assassination attempt that leaves many others dead—and the house he was visiting burns to the ground. Invisible to security cameras, the assassin literally disappears, and Nell’s team is called in. As they track a killer they know is more—or less—than human, they unravel a web of dark intrigue and malevolent motives that tests them to their limits and beyond.

I’ve been an advocate for Faith Hunter’s SOULWOOD series since the first book. That being said, Hunter hits her stride in FLAME IN THE DARK.

When a senator’s home is attacked during a gathering of Knoxville’s prominent citizens, the local law enforcement doesn’t think the crime was perpetrated by, or directed at supernaturals, but Nell’s PsyLED team is called in due to the presence of Ming Glass, the numero uno vampire of the city.

A good thing too, b/c when Nell “looks things over” as only she can, she discovers a villain who is her antithesis.

Everywhere it stepped the plants are dying or dead in a way Nell can do nothing to stop. The damage is irreparable. The death as permanent as if the earth had been salted in the unknown creature’s wake.

For one with a tangible connection to growing things, this is understandably upsetting.

As a reader with no connection to growing things whatsoever (I can’t even keep a rubber tree alive—Seriously, I’ve managed to kill at least two of them), this thing joins the ranks of most sinister villains ever. For real. It’s death incarnate. How do you kill death incarnate? Can it be killed?

Fortunately for everyone involved, Nell keeps her head better than I did, methodically researching the people involved and narrowing the list of potential creatures down to half a dozen options, and that’s when things get interesting.

Me: Interesting in that one of the possibilities makes Soul, the heretofore unflappable Assistant Director of PsyLED, lose her damn mind.

So that’s fun. Especially when Nell doesn’t hesitate to suggest that Soul remove herself from the investigation as her emotional involvement may prevent her from dealing with the creature(s) according to PsyLED policy (rather than just killing it/them with fire).

Nell might talk real country, and she’s usually pretty laid back, but dollface has a spine of steel.

In her own way, Nell is every bit as badass as Jane Yellowrock, and that becomes clear in this installment.

Also clearly defined by FinD is Nell’s relationship with Occam.

In the prior books, neither his interest nor Nell’s discomfort (at the feelings his interest evoked) were secret, but there wasn’t sufficient development for me to be emotionally invested in the final outcome.

That is no longer the case. #ishipit

Also, also, various side plots that have been flailing since they were introduced have been resolved: View Spoiler »1. The festering remnant of Brother Jerkface that Nell ignored beyond the occasional acknowledgement that she’s gonna have to do something about him eventually.

All in all a satisfying and eventful chapter in the story that is Nell Nicholson Ingram. SO. If you love urban fantasy and you haven’t already started reading SOULWOOD, get on that immediately. If you wait much longer, you’ll start complaining about the number of installments to get caught up on, but you won’t be able to blame anyone but yourself, and who needs that kind of self-inflicted regret? NOT YOU. If you aren’t new to Nell, but for unfathomable reasons have fallen behind, now is the time to play catch up. Seriously. You’ll be missing out on ALL THE THINGS if you don’t. Highly recommended.

2 responses to “Review: Flame in the Dark by Faith Hunter”