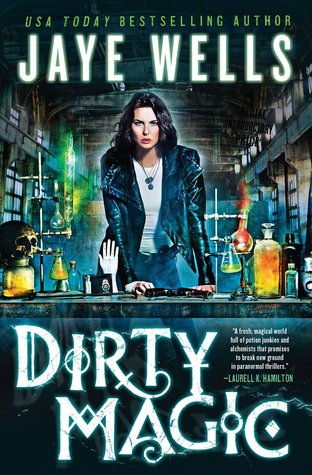 I read Jaye Well’s Sabina Kane series wayback before I started before I started reviewing. I really enjoyed it. I remember when this book came out. I quickly added it to my TBR, but for some reason, I never tried it. (Same with the Meridian Six series too). Well, I was looking for a book to read, but not listen to. I decided to go with this one. I know the narrator for this series. I don’t dislike her, but she isn’t on my must listen list. I’m so glad I finally dove into this series. I wish I hadn’t waited so long.

So this series follows the life of Kate Prospero. She is a cop, but she has a past making dirty addictive potions.She now doesn’t do magic at all. She gave it up cold turkey and even goes to a group session sometimes (like AA). She is also raising her younger brother, who is still in high school.

Office Prospero became a cop because she wanted to make a difference and to make up for her past indiscretions. However, she doesn’t feel she is making much of a difference just booking street level dealers. That is until she is attacked by someone on a new potion she’s never seen. She works her way onto a taskforce to track the maker of this new potion. Oh, and she finds out that her ex-boyfriend (and former dirty potion maker) is a prime suspect.

There are several things I really love about this series. One, is the fact that Kate Prospero faces a lot of the same burdens that happen in everyday life. Raising her younger brother is very hard on her (as I’m sure it is on him too). They have arguments like any parental figure would have with a child. She struggles to do the best she can for the boy, but it is tough raising a child, especially as a cop.

Second, I love the world that she’s created. I like watching how this world works with all the different potions.

Third, the characters are pretty amazing. I love all the main characters of Kate, John (the ex), Agent Morales (on the task force), Mez (forensics wizard on task force), Pen (her best friend), Special Agent Gardner (task force leader) and even Baba (her neighbor who practices a more Wiccan kind of magic). They are all well developed characters, even the secondary ones.

I would be remiss if I didn’t mention the snitch, Little Man and Mary. They are an interesting duo. They are a very unique version of conjoined twins, from their mother taking too many fertility potions. Little Man appears as a baby, but is the brains of the two. Mary is a very large woman, but with the emotionally capacity of a child. Together, they do all right. She is the physical protector and he keeps them up with his smarts. He knows everything that is going on in the city. If you need information, he is the one to talk to. I will admit that he is very vulgar and that can be a little creepy. I also can’t imagine having the thoughts and urges of a full grown man in the body of a baby.

Fourth, the suspense/plot of the story is really great. I loved all the action and the mystery. I love the mixture of cop/crime story with the mafia aspects too. Fans of Elemental Assassin, The Hollows, and Night Huntress should look up this series. It has similar action to Kate Daniels, but doesn’t have as much of the snark. There is some, just not at the same level as Andrews’s series.

The one thing I will fault it for, but not in a huge way, there appears that there might be a love triangle in the making. I’m not sure if there is, but it looks that way (don’t tell me if there is, I don’t want to know). Romance is always secondary to me for Urban Fantasy series, so I’m not too concerned. I will just let it play out and see.

I’m excited to read more of this series. It is good to know that I listen to, if I decide I don’t have enough time to read. I do like this narrator. If I start listening, I might decide I have to listen to this series. Who knows. For now, I’m going to stay with reading.

I definitely drew the line at drinking another woman’s bra hooch.

My kid brother gave me a look with eyes that appeared way too wise for his young face. “Hold up, are you talking about one of those sex magic shows?”
My brows slammed down. “How do you know about those?”
“Kate, I’m sixteen. What the heck do you think my friends and I talk about all the time?”
Jesus, I really wished I could change the milkshake order to a whiskey. I slammed another gulp of water. “I was hoping you discussed sports and homework.”

I nodded to accept the backhanded compliment. “We got the casserole from Francine. Thank her for me.” I’d thrown it out in the garbage the day it arrived. Why did everyone send casseroles in times of crisis? Why didn’t anyone ever send brownies and Jack Daniel’s?